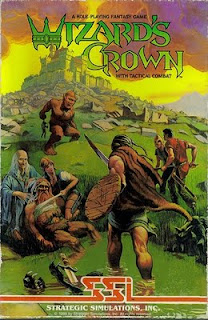 This is probably one of my very few regrets in life, or maybe not regret so much as unfulfilled wish.  I ALWAYS wanted to play this CRPG.  It was released by SSI right in the middle of the AD&D 2e hullabaloo in 1986.  I had stopped playing D&D by then, but was still interested in fantasy RPG's.  I played rogue and Bard's Tale and Ultima, but they seemed more like games I played because everyone else did, and frankly they did not deliver an RPG experience the same way I played them with pen and paper.

Then came Wizard's Crown...the box art alone and me geeked! Wallow in its greatness! Here is a fantasy cover with NO ONE in plate mail, a guy is injured, the shield has no heraldry and its scarred and to any TFT/Melee/wizard fan the phrase TACTICAL COMBAT was like manna from heaven.  It was like someone got into my head and lifted a scene right out of my pen and paper game!  I read ads, saw it in stores, and even read a LOOONG review in Dragon #114 about it.  It was the perfect game I had waited for!

I can;t come up with a because "x" then "y" rationale but I think I can tell why.  I know the $40 price tag was beyond my means to some extent, and we did not have a computer to play it, as I played over at a friends on his C64.   My guess is I never bought it because my friend WAS a Bard's Tale fanatic, and I know my type of game would have been not often played by him.  So I would have a $40 rarely played game, or worse, I'd leave it at my friends dirty house and his dog or something worse would happen to the game.  In the end whatever the reason I never got to play it.

I know there are a TON of emulators and I "could" play it today, heck I even have a word doc of the rule book for pity's sake, just for nerd coolness.  One of the problem's with some games is they don;
't age well visually-and honestly WC did not age well.  Now for a guy who loves roguelikes you would think this would not matter...but for some reason it does.  Still, If I could find a poster sized version of that cover I would snap it up in a heart beat!  A sequel to WC came out...dagger something...but it just never fired my imagination like WC did...and still does. 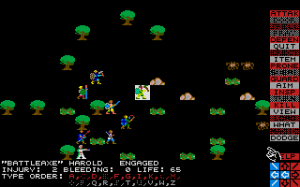 Anyway, I guess that is one more strength for pen & paper rpg's really, the visuals you have while playing them never go out of date.
Posted by Fenway5 at 5:51 AM

Thanks for pointing this game out. Somehow I missed it... going to see if I can find it and play it. I love playing the old games, graphics-warts and all. Bards Tale, vol. 1 in glorious "EGA" is a trip! :)

Thanks for the memory jog--and yes, that cover is superlative!

@C-Wiz...No problem, gald I am not the only gamer left in the cold on this one, if you get ti rolling let me know if it is as good as I fear!

@Jay-Thank you sir! Now I may have to play it...finally!

@Erin-oh man those gold box beauties were the bomb back in the day!

It was one of my favorites on my C64 (other than Ultima IV.

@just-tell more What made it so great?

This was one of my favorite games back in its day. It was very deep tactically, modeling such effects as flanking, weapon reach, bleeding, and types of damage (blunt, piercing, cutting). The plot was only thin framework for the nice combat engine and leveling system.