Well it took a lot of work and waiting, but all the bits for my limited run of the COLLAPSE RPG Administrator kits are here!  I am only making about 25 kits and when they are gone, I don't know if or when there would be another run.   Each Administrator's Kit includes:

Price
$45+$5 shipping in the lower 48 US
Ships in a padded plastic envelope.

Intl. shipping prices will be on an individual location basis

I'll post an email where you can contact me to purchase a kit once I have all the kits completed and ready to ship.  I'll also post a picture of the completed kits this weekend so you can see it before you decide.
Posted by Fenway5 at 5:47 PM 2 comments:

Ogre and GEV from Steve Jackson are near perfect war games.  To the left you will see some of my own OGRES including the dreaded OGRETHULHU. Yes I love the game enough to play the miniatures version! Owning and having played a few hundred different war games, OGRE/GEV remains my most played-and one of the few I can get anyone to sit down and try.   Let me break down why:

1. Theme: One big guy versus lots of little guys, David and Goliath in tank form
2. Clear Goal: kill the base or kill the Ogre
3. Low focus factor-The newbie has one piece to control the OGRE
4. Early victories-the OGRE crushes lots of people and stuff before you can get close to stopping it. This gives the OGRE early successes and keeps that player hooked right away.
5. Simple terrain rules-you go fast on roads, slower in swamps, things in cities and trees are harder to kill. NO LOS nor any ZOC's, if it is in range you can try to shoot it.

In its simplicity, and focusing on the basics of what makes a war game, Jackson created a simple but effective design.  What is surprising to me is by adding GEV he created a true war game while retaining the simplicity of design established by OGRE.  This is frankly suprising.

If you look at Jackson Game designs, he starts with a pure skeleton of a game that is playable, understandable, inexpensive, and fun!  Then for whatever reason he takes that pure design and begins "improving it."  The improvements being to bury   the core system into a morass of exceptions and special rules that leech the fun out the original.  For your consideration:

2. Melee/ Wizard-small box games that evolved into a more complex TFT...that then evolved into GURPS.  I like the idea of GURPS because Melee/ Wizard is still int here somewhere...but damn if I'll ever play it there is simply too many exceptions and special rules to make it any fun!

Given his game design history and penchant for over complication one must question how OGRE/GEV survived unscathed?  Frankly its remarkable!  The only missing element in my opinion from OGRE/GEV is air power.  In my opinion they could be added like they were super GEV's or something like that.  I think it would be quite simple to add them without breaking the system nor creating a host of new rules or complications.

There are a few different official maps for OGRE/GEV, but a lot for the fun I have had is with finding maps from my war games to use with OGRE/GEV.  A couple of snow bound maps representing the Soviet invasion of Finland from WW2 inspired an alternate time line in my own version of OGRE/GEV.  After the breakdown of the EU, the Soviet Union rose again. In response to threats from the NuSOV the Scandinavian countries protecting their oil reserves and people united under a new Gustavus Aldophus. The soviets start out their campaigns with tanks and troops,and eventually have to send in OGRES to try and beat the Scandinavian forces.  We played through this inc college tracking the battles on maps and playing them out in a little more than an hour when we had a chance.  At the time we colored the white OGRE/GEV counters red to represent the NuSOV army and the Scandas were black.

A few years ago in remembrance of those great games I created Soviet Counters and Royal counters for revived Northern Alliance of Finland, Sweden, Norway, and Denmark.  I upload them here for your use. Enjoy!

There is talk (and has been for a few years now) of bringing back OGRE/GEV in a new boxed form with super thick counters and hard mounted maps.  I will snap it up for certain, and if you have the chance to play it or buy it, I can;t recommend it highly enough.
Posted by Fenway5 at 8:52 AM 2 comments:

Inspired by Superhero Necromancer sharing some fantastic TFT resources, I've decided to put up my Traveller TFT stuff I've collected.  Some is Dark City Games Legends of Time and Space and includes their rules and 2 solo programmed adventures.  In addition are Ty Beard's Traveller and Hi Tech TFT rules.  Dark City also has a number of sci-fi modules based on their rules for purchase.  I own them all and they are good!

Between Ty's rules and DCG's rules you have a pretty good core set to play sci-fi TFT.  It's not complete but I think it shows the flexibility and possibilities of the TFT engine.  Too bad GURPS took this simple set and went off the rails because I think in about 36 or 48 pages you could create a pretty good rpg using this as a basis.

UPDATE: I have created my own Melee/Wizard/TFT inspired fantasy game Heroes & Other Worlds. You can checkout an initial review from Robert Saint John on RPG geek.
Posted by Fenway5 at 7:32 PM 1 comment:

Pocket Full of Peril #6: The Viper's Nest
The coastal town of Gorath is suffering from a sudden rash of disappearances.  Some believed press gangs might be the cause until a kuotoa was slain by a citizen guard group near a dock.  The town militia spotted light in the old seaside temple.  They went up and were ambushed by dark elves an only one cam back bearing a letter of warning from one who called himself The Viper. Now they'd rather pay you gold, then pay with their lives to find out the secret of the temple. 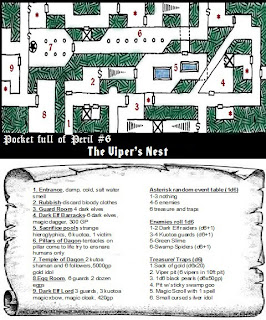 Tip of the cap to STONEWERKS for the Geomorph and inspiration!
Well my creative burst this week is now at an end.  Back to the salt mines tomorrow.  It amazes me how having some time without the shackles of the daily grind frees me up to pursue with passion these kinds of things.  I get more satisfaction from creating a little adventure or mini game in an afternoon then I do from a month of work.  I hate to bid adieu to this little creative jump, but it may be awhile before I get the opportunity to focus on gaming stuff again.

2011 is my year to finish my Roguish Fantasy RPG, so I will be posting updates as I go on that site.  The COLLAPSE Administrators kit bits and pieces are on order and once put together and ready to ship I'll post its availability on my COLLAPSE site, I am making a very limited number of them so keep a weather eye out. Sword & Shield will remain my site to talk about gaming in general and posting random bits.
Posted by Fenway5 at 9:42 AM No comments: