Besides gaming I have a lot of other interests in history, literature, movies, cocktails, camping, and blah blah blah...

So I am firing up another blog about all the good stuff that makes me glad I am above ground as a man every day. You have a hint of what's to come from the Quiet Man post and the Hemingway post. If you liked that-there will be more, and if you didn't-well there is one less site you need to waste time with.

http://rowdyredrooster.blogspot.com/
Posted by Fenway5 at 7:56 PM No comments: 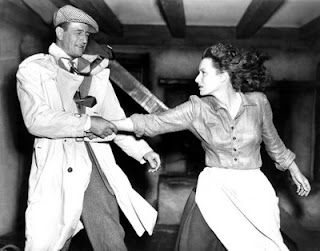 Who? John Wayne and Maureen O'Hara
What? Fall in love
Where? Ireland
When? Could be set in the 30's or 40's its never really clear (film is color 1955)

Why you have to see this movie: In my book it's the best damn date movie EVER...and that's not up for debate. A Strong silent type man falls for a fiery headstrong independent woman. Instant friction and that's before her older bully brother steps in to make life more miserable. There's drinking, fighting, a horse race, a wedding, a dark secret, and hell John Ford directed it so you know its damn good.

This isn't a sappy, nebbish, for fuck's sake spit it out you lousy emasculated dishrag muppet "Notting Hill" date movie nor a more white wine spritzer HOLY CRAP where is the humor or at least some Nytol so I can sleep through this "27 Dresses."

Maureen O'Hara is not a push over woman or Dr.Phil/Oprah weak knee dithering ninny. She is confident, stands up for her self, knows what she wants and is all woman. John Wayne is..well it's the Duke, I mean outside of Clint Eastwood does it get more Archetypal American male? (hint-the answer is no amigo.)

Look at that picture my friend, that is a true man and a true woman and its a hell of a good story. So fix a nice meal for your significant other (microwave is off limits as is anything you "just add meat" to) and put some effort into it tiger!
Mix a couple of nice cocktails, dim the lights, and let John Ford and Ireland work their magic, you can thank me in the morning.
Posted by Fenway5 at 8:38 PM 2 comments: