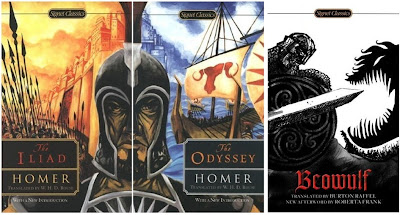 That's three of my all time favorite books!  Look at that art from the new signet classics releases, I had to buy all 3 (again to my wife's dismay) JUST because the art is THAT COOL.  Especially the cover of BEOWULF-if that does not say SWORD & SHIELD brother you aren't looking (or reading) closely enough!

...and back in '78 Glenn L. Williams converted some of their biggest scenes into Melee/Wizard scenarios!  Below is the article from Space Gamer #16 so break out your hex maps and counters and let me tell you of the days of HIGH ADVENTURE!

by Glenn L. Williams
Fantasy has always been an important part of man's culture and literature - from Homer's epics, through the British scops, to our contemporary sword and sorcery authors. These great fantasies almost always have as a central theme some form of personal combat, whether physical, magical or both. With the microgames MELEE and WIZARD, these battles of literary fantasy can be recreated. I have chosen three epics: BEOWULF, with its three battles; the ILIAD's final duel between Achilles and Hector; and the ODYSSEY, in a solotaire version of the cave fight between Odysseus and the cyclops, Polyphemos.

I. THE TRIALS OF BEOWULF (OR BEAT THE GEAT)

The concept of gaining personal glory through personal combat (aristeia) was certainly present in BEOWULF, but it is more explicit in Homer's epic, the ILIAD. If you have not read this fantasy classic, it opens in the last years of the seige of Troy with a quarrel between the Greek's leader, Agamemnon, and their superlative warrior, Achilles. The hero withdrew to his tent to sulk, knowing that without his strength and the terror he inspired, the Greeks would panic and be slaughtered when they faced the Trojan's greatest warrior, Hector. Only when Hector killed Achilles ' best friend , Patroklos (who was impersonating the sulking Achilles), did the great warrior re-enter the battle. Unfortunately, Hector had stripped Achilles' armor from Patroklos' corpse as battle spoils, leaving Achilles without armor. His divine mother convinced Hephastos, the gods' smithy, to forge brilliant and glorious new armor in which Achilles strode forth to meet the towering Trojan hero. The duel ended surprisingly quickly once the two came face to face, and the Greek killed the Trojan. Hector's death left the Trojans without a mighty warrior to lead and inspired them, and the disspirited city eventually fell. The end of the city and the wooden horse are not part of this epic. This is the framework within which the duel can be staged, with some modifications for balance.
Obviously, these god·favored warriors were not ordinary men, but had special characteristics which elevated them above the mass of opposing spearmen. Hector, although stronger and braver than almost all the Greeks, was not so brave nor so strong as Achilles. Their personal characteristics are given below:
The armor of Achilles was special due to its divine origin, while that of Hector, although well made, was ordinary. The skill and experience of Hector compensated for the encumbrance of the breastplate and greaves. Therefore, Hector's armor is the equivalent of chainmail, with no penalties. Achilles' armor is the equivalent of plate, with no penalties. Each of the heroes carries a normal large, round shield, each may carry two spears and wear a dagger. The extra is carried in the shield hand and must be readied before used. A spear cast is ½ normal DX adjustment, that is -1 DX for every 2 hexes the target is distant (round fractions down).
If you desire to add other warriors to either side, their ST and DX would be 12. their IQ 8. Armor is chainmail equivalent, their equipment: a large shield, spear and dagger. They may serve as either the hero's immediate companions, or as the mass of battling warriors through whom the heroes must wade to get at each other. Both functions are illustrated in the epic. These other warriors may also have a spoiling function, getting in the way of cast spears or trying to get the enemy hero with a lucky thrust of their own. Back-stabbing is a legitimate tactic.
The battles of the ILIAD, whether the mass actions or the individual duels, were played against the larger scheme of Zeus' divine plan. The various gods and goddesses backed first one faction then another, much as gamblers back different horses. Some stayed relatively loyal to their chosen favorites, Athena to Achilles, Apollo to Hector. Divine assistance provided to these men resembled the spells in WIZARD. To receive divine aid, the heroes must generally roll against IQ.
Achilles has three of these divine "spells" plus one of his own:
The "spells" available to Hector are three:
Use the WIZARD board. The heroes begin on opposing sides in the entrance hexes. Neither may leave the field until his opponent is killed. It does not matter who kills the hero so long as he expires. Ordinary warriors may be forced to retreat off the board if they are against the edge when they take five or more hits: if they do so, they are gone for good. They may also panic (instead of being frozen by the war cry). Panic is random movement off the board To better simulate the fearsomeness of the heroes in battle, you might also require an ordinary warrior to roll against IQ when attacked by either Achilles or Hector, failure meaning the poor fellow turns tail and runs off the board.
With these modifications to MELEE and WIZARD, you are ready to take up spear and shield and stand before the towering walls of Ilion. As Achilles, you have an opportunity to wipe the stain from the honor of Helen's husband Menelaos, as Hector to save you r city from pillage. Helen's face may have launched a thousand ships, but Hector's valor may sink them! May Apollo or Athena be at your side.

III. ODYSSEUS IN THE CYCLOPS' CAVE (OR NOBODY KILLS SOMEBODY)

Homer's second epic, the ODYSSEY is the story of one of the Greek heroes' return home. The hero, Odysseus, had angered Poseidon, and the god placed many obstacles in the sailor's way, delaying his homecoming for ten years. One of these obstacles was the cyclops Polyphemos. Odysseus and some of his crew were trapped in the cyclops cave when the giant one-eyed monster rolled a massive stone across the entrance. In the epic, the Greeks fashioned a spear and blinded the brute, then escaped from the cave by clinging to the bottom of his sheep. Odysseus, before blinding the cyclops, had told him his name was Nobody. Thus, when the giant roared in pain and his fellows came to aid him, in answer to their question who had injured him, the unfortunate replied, "Nobody." The other cyclops had better things to do than listen to such drivel and left.
This scenario is solitaire and played on the MELEE board which represents the cave. One set of entrance hexes is the blocked cave mouth. Odysseus has four crewmen with him. Their ST and DX are 12, the hero's ST 12, DX 14, and an IQ of 14. The Greeks have neither arms nor armor, only one spear which they must share. Odysseus has two "spells" which simulate his reputation for clever, quick words: a confusion spell with a presumed ST of one, and a limited control person. The latter has only one purpose: if the cyclops has been blinded, and stumbles against the entrance, Odysseus may try this spell. If he succeeds, the cyclops will roll away the stone and flee into the outer world. If he fails, either the cyclops will eat the Greeks, or they will have to get used to the smell of rotting cyclops while they starve in the dark cave. The scenario assumes that unlike the epic, the Greeks botched their first strike, and the cyclops is armed with his club and very angry. Any time the Greeks get a hit with the spear, roll against the spear carrier's adjDX -2 to see if the cyclops is blinded. The Greeks are huddling together, and therefore must occupy adjacent hexes.
The cyclops' move is always a charge attack if not engaged, a shift attack if engaged, and an attack in hand-to-hand combat. The characteristics of the cyclops are those of the WIZARD giant. When he moves to attack, he will always attack the center of the group. Once he is blinded, his options are the same, but his movement changes. Roll one six-sided die for direction. Roll a second for dis lance in hexes. Even if he rolls a six for distance, he still charge attacks. If he runs into a wall. he takes one ST point in damage. The WIZARD countermix includes a beautiful cyclops.
In this scenario, if you can lie, cheat and steal, you might make it home. One hint, though: don't kill the poor guy before he opens the door, even Odysseus couldn't lie to a rock and get it to roll away.
In each of these scenarios, surviving is not easy. The heroes won their battles not merely by skill but by luck, the roll of the die. I have meant it to be hard to recreate the hero's feats in personal battle. The same techniques may be applied to other fantasy battles. For example, David (a small hobbit-like figure with a sling) can meet Goliath of Gath (a Hector-like hero), or Horatio can defend a narrow bridge. May your fantasies be pleasant!
Posted by Fenway5 at 5:55 AM

Very cool. Thanks for pointing this out.

Oh, and the book covers are really cool. Particularly the Iliad/Odyssey.