One of my least favorite portions of RPG's is spells, and magic. Part of it stemmed from the way it was handled in D&D. I did not like the fire and forget method of spell casting. I also did not like the rags to riches method of wizards starting out weak and then becoming overly powerful. As stated in an earlier post, Gandalf would be about a 5th or 6th level wizard in a D&D system that goes to level 36.

Contrast that with magic in Metagaming's Wizard. Energy used to cast spells was derived from your Strength stat so you could cast fireball as often long as you had Strength to do so. Problem was, ST was also your Hit Points so if you cast spells you weakened yourself making your character easier to kill.

Magic in D&D is then codified by classes, subdivided by level. This always seemed an awkward and artificial construct to me. Only wizards know this, only clerics know that, only druids learn this...regardless of race. The whole class codification of roles I suppose is part my problem compounded by why are certain spells only available at certain levels? I suppose this makes some sense in limiting characters from having all powerful magic at low levels...but I think it is an artificial constraint...much like the class system is in general.

So as I write my own RPG I have decided to make magic work based on energy from a stat, but you won;t be killed for casting spells. Second, magic spells will be based upon racial divisions of knowledge. Within those racial divisions will be additional divisions perhaps Black magic and white magic for humanity. Green Magic for elves, Red magic for dwarves, etc. It could even be subdivided by "culture" as well but at this point I do not know if that is a necessary contrivance in the rules-or let referees do this as they wish.

Each race then has its own "spell book" of knowledge it has built up in its culture over the ages. Yes there will be some overlap,but there will be many exclusive spells as well. This will foster (I hope) an idea that learning a new spell is something exciting, and players may even seek to teach or steal) spells from each other. My hope is rather than classes defining what spells you learn the referee in each game can make the learning of spells special, unique and exciting in their adventures. Beyond the starting spells a player chooses, there are no more automatic spells gained by players. They will be found as the players adventure in the the world, or if they are able to pay to learn them...but no magic user would ever sell a 4d6 or higher spell...

Since my whole system is d6 based, spells are classifies as being 3d6, 4d6, 5d6 and 6d6. This represents the difficulty in casting a spell. The difficulty is the number of dice rolled to determine if the casting is successful or not. The more powerful the spell, the more difficult it is to cast. While a starting character may only learn 3d6 spells at creation, a character could learn a 6d6 spell at anytime they could find one.

So my system will limit spell casting by three methods: racial knowledge, energy available for the player to cast it, and the difficulty in casting a specific spell.
I believe players will have more flexibility and unique opportunity in casting and discovering spells in this game, and I hope for the referee that provides more opportunities to create a rich world to game in.
Posted by Fenway5 at 3:26 PM No comments: 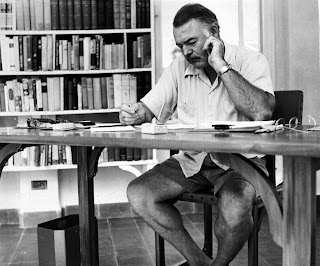 Blame it on Hemingway. As much as I love fantasy stories and tales, often times they become so self engorged with describing details and setting scenes that it becomes distracting. The overload of detals diminishes my imagination as the reader. The end result is it pushes me out of the scene or story rather than drawing me in and making forget about the world outside.

Ernest Hemingway is, in my opinion the finest American writer. While I do not like everything he has written, the vast majority is, to my mind perfect. I think the sledge hammer for the power of fine writing, and especially Hemingway’s writing, kicked me in the head like a mule when our Sophomore lit class had the following exercise: Read the short story "The Hills are like White Elephants" and when you finish, describe what the two main characters look like.

So we all did it. We turned in our brief paragraphs and the teacher wrote on the board outlines of we said the characters looked like. No one really had the same description even though we all read the same story. So here comes the mule kick: It turns out, nowhere in the story does Hemingway actually describe the characters appearance, yet through their conversations we all got an impression (albeit different) of how the characters looked. Fucking genius.

Now flip to the opposite writing style provided by Mr. George R.R. Martin’s “A Song of Ice & Fire series.” Friends swore I would love it’s politics, gritty combat, and low magic setting. I picked up the first book and tried to read it 4 times before I finally got into it. It is a great story and I very much enjoy it despite the overly verbose descriptions of every meal and of every outfit worn. It literally takes a monstrous force of will to drive me through these endless and needless (in my opinion) details that actually detract from the story. In fact, I might even say one could shave hundreds of pages from each novel and improve them by cleaning up the overly descriptive manner in which Mr. Martin lavishly details each meal or outfit.

So what does this have to do with gaming? I believe Hemingway’s writing style illustrates that brevity and clarity should be the goal of any good writer. In good rules and good adventures that sort of brevity and clarity translate into more opportunity for the individual or group to make the game their own. The Moldvay B/X rules accomplish this brilliantly for D&D. They provided the skeleton upon which we as players added the heart, mind, and soul of adventuring to give it life.

One of the many failings that I believe sprung from (and grew) as a result of the 1st DMG is the idea that the more rulings one creates for any event in an RPG, the better and perhaps less confusing the game becomes. Much like a novelist who insists on detailing every spice in a meal, every type of bead on a gown, or every coat of arms at a tourney, nothing is left to your imagination. Does this excessive detail make the novel better? Does having a rule for what happens if my character in chainmail falls out of a boat, and a rule for the wizard in robes, and a rule for the Paladin in plate make a game of imagination more fun to play?

By increasing the rules to cover more and more situations, one takes out of the referee’s hands the chance to be creative and to make the game their own. The more details and rules put into the books to cover any possible situation helped to create the rules lawyer. This breed of individual would be much better shown the door when the words ”game” and “fun” are in the same room with this individual. The rule for everything idea stifled creativity and imagination, and also created multiple text book sized necessary reference tomes to “play a game.”

As I write my own RPG rules set, and concept how I plan to lay out the entire line, much like Hemingway I sit back and then cut back. I am trying to parse it down to what matters in order to play the game, without answering every question nor providing every potential detail on how you should do it. I want to provide the Hemingway short story form of an RPG giving the players the ability to dream up their own worlds and flexibility to create their own tall tales using it.
Posted by Fenway5 at 3:05 PM 4 comments: