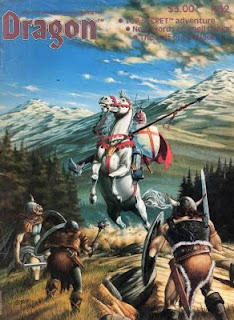 It's odd the things that stick with you.  The smell of burning leaves in 5th grade, the biggest line I ever saw waiting to see Star Wars, the first Star Wars figure I ever bought (Ben Kenobi), and your first Dragon Magazine.  Mine was issue #62, June 1982.  Yup an Elmore cover that I loved then and still love now-it was D&D for me.   I wonder where I can get this painting...

Anyway, there are not very many Dragon magazines, nor articles that I can recall very well.  They just never stuck with me with through the years.  What did stick with me were the wonderful ads in Dragon magazine.  The old Dragon Bone electronic dice roller, Ral Partha Miniatures, and my own favorite-the game ads from Fantasy Games Unlimited.  Growing up my RPG collection had a vast (in my mind) collection of FGU games.  Bushido, Villains & Vigilantes, and Aftermath!

Each one of these games, I became excited enough by the small ads in Dragon magazine to go find them in Endgames at Clackamas Town Center in Portland, Oregon.  The first one that really intrigued me was the ad for V&V.  I thought it was so cool to not only see art and pricing, but to see an actual character laid out!  Going over the stats and description were fun and left me a feeling with what else might be in this game?  Below is the first ad I remember seeing and the one that stands out the most. 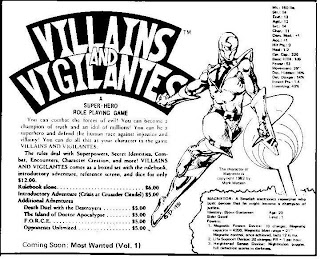 I am going to guess it was about a year of looking at the ads before I finally got the V&V boxed set, it was my first super hero RPG and the standard by which I judged Champions, Marvel, and DC Heroes.  All fell flat in comparison.

Next was the holy grail of games...Aftermath!  I watched Road Warrior a lot as a kid, combine that future vision with Red Dawn, Planet of the Apes and GAMMA WORLD, and I was already deeply smitten with P.A. stuff.  I know GAMMA WORLD has its adherents and there is stuff I like as well-but it always seemed like D&D with mutant plants and laser guns.  The Metamorphosis Alpha strain is deep within that game, and just does not appeal to me.  I think because I never saw a show or movie, nor read a book that backed the GAMMA WORLD assumptions...and still haven't.  Aftermath! on the other-hand I have a laundry list of movies, shows, and books that sounded like that! 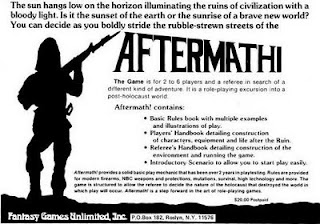 I saved forever to get that $20 boxed set and it was fantastically filled with everything I hoped and more!  One problem, for me it was far too complex and unplayable.  Worse for me it was filled with gun-porn. Detailing out all the possible modifiers and possible ramification of firing a gun, any gun, using all sorts of ammo types...and then determining where on 30 different body locations it may have hit.  Sigh...I know there are gamers who want all of this detail AND MORE, but sadly that isn't me at all.  A game should be fun, not a PhD course on ballistics.  Anyway we played in our own fashion and I managed to get nearly all the modules and supplements to use as resource material..because it is great for that.  It inspired me to create my own COLLAPSE RPG, so I certainly owe FGU and Aftermath a tip of the cap for that.

Clearly the ad genius(es) at FGU knew how to reach me, and maybe some other gamers as well.  They left a heck of mark on me (in a good way) and inspired me to try something similar for my Roguish Fantasy RPG.  Below are the results of that inspiration for you to enjoy.  I may even use them as adds in Fight On! or Knockspell. Back to the salt mines tomorrow so my blogging creativity will return to its normal random state, in the meantime enjoy your trip down Amnesia Lane... 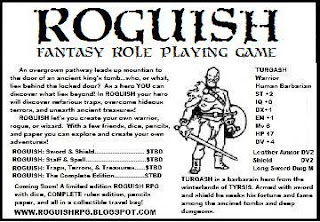 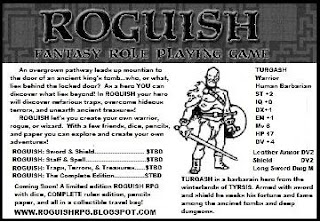 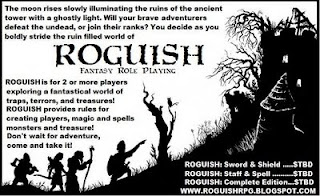 The "Aftermath"-inspired one is your strongest design. I'd eliminate the greyscale from the "V&V" one and that'd be a totally bad-ass pair of adverts, my homey!

@Dr.-thanks for the feedback, updated and posted image per your suggestion, yes it does look better!

The last one is BRILLIANT. The first one is good. The second is... weak.

Thanks for the honest and constructive feed back! Agreed, as much as I wanted an old school/ new school mash up, #2 clearly rides the middle of the road and gets run down for it. :)

Mr. Luschek's art is BRILLIANT indeed (#3) while I never played Harn, his art is what I associate with that brand and has always been a favorite of mine.