From the Pipeweed Gnome: Realism vs. Rationale 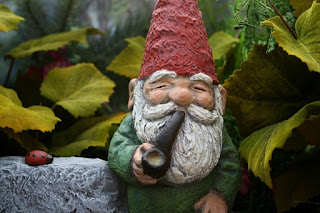 AS I get older (not necessarily more mature) my tastes in gaming have changed.  At one point D&D was enough, but there were gaps I wanted filled.  Then TFT fixed some issues but left out some of the fantastic in favor of realism.  Experimenting with game systems went to and fro: from Gamma World to Aftermath or the Morrow Project, Conan to Palladium Fantasy, Chill to Cthulhu, Dinky Dungeons to Chivalry & Sorcery, Marvel Heroes to V&V and DC Heroes...and on and on.  If I sat and tried to recall all the various game systems I have owned and played I am pretty sure its well over 120 at this point.  From the simple to uber-complex each offered something I liked...and things I did not.

Now I know I am firmly on the side of simple game engine, and players ability to add their own complexity. In the end though, one of the greatest issues in adventure games for me is the conflict of realism versus rationale. I think I have finally resolved this issue (for myself) as well.

So let's define both before proceeding further:

Realism: concern for fact or reality and rejection of the impractical and visionary, the theory or practice of fidelity in art and literature to nature or to real life and to accurate representation without idealization

Rationale: an explanation of controlling principles of opinion, belief, practice, or phenomena,

an underlying reason or basis.
At this point I have steadfastly learned to limit the need for realism in fantasy games of any stripe, at the same time I have replaced and increased my need for rationale in my gaming.  Orcs that breathe fire and fart poison gas clouds-okay cool, but why? I am all for weird fantasy and the oddities of some of the more creative minded, but I can't simply go there with you just because you say so.
Many decry the fun-house nature of some dungeon crawls, wanting a logical ecology or reason for things operating the way they do.  I agree with a rationale for the setting, but not with a need to create an ecology to turn the fantastic realistic. An old dungeon becomes the lair for a lich and his legions of undead? That is a rationale for the undead dungeon crawl.  An old king or wizard kept a menagerie of beasts in dungeons under his castle from foreign lands-okay there is your fun house rationale, I am good to go.
I am no longer looking for accurate damage models based upon the unicorn horn piercing strength while charging at 33.7 MPH versus the tinsel strength of adamantium armor blessed by King Gruffenwald. At one time I was, but having given up on most realism in my games, all I need to know is: what the rationale is in your world for this happening.
Oh to be clear, I don't desire a frustrated fantasy novelist exposition.  Given a couple sentence of description regarding your rationale, maybe 3 at most, I am happy to play right a long and enjoy the ride.
Perfection is achieved, not when there is nothing more to add, but when there is nothing left to take away.  Antoine de Saint-Exupery
Posted by Fenway5 at 10:59 AM No comments:

In praise of pig faced orcs

I never had an issue with orcs being pig faced.  In fact it never struck me that they would be anything but.  Which is odd considering my first memorable look at orcs was not D&D, but instead the Bakshi Lord of the Rings animated films.  In Bakshi's roto-scoped vision they seems more like fanged beastmen.  Cool looking and spooky, but I'd be hard-pressed to call them pig faced.  Even so I don;t think I ever thought of them as "pig faced" until D&D. 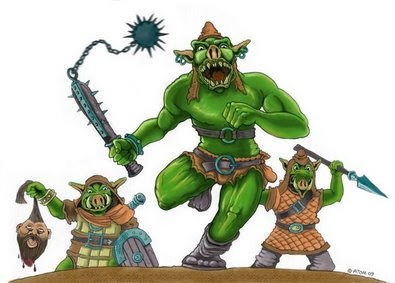 Now these green skinned guys are more along the lines of the orcs I had in mind from D&D.  Pig faced humanoids, boar tusks, and green skinned.  I never understood why they were green skinned though.  For what ever reasons goblins being green was fine (probably a pre-established mental tie-in from Marvel's Green Goblin) but orcs as green skinned? Well I guess  if there are other oddities in a fantasy world, why not this one.  But...on the front of module B2 we see Roslof's interpretation...maybe.  There is still dispute over are these hobgoblins (with their samurai like armor) or are these orcs give their pig faced attributes...if orcs, why are they reddish and not green skinned? 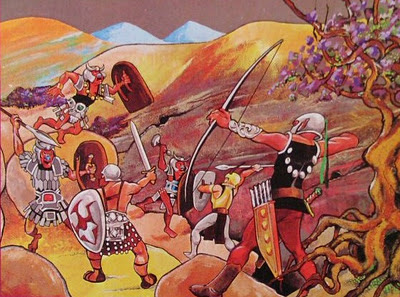 Either way, the orc never really held too much overt interest as an enemy for me.  In fact in the starting monster hierarchy (Kobold-Goblin-Orc-Hobgoblin) they were just a stop along the way, with more HP and who could do more damage.  I blame two things for this: one is my own youth and (lack of) understanding in DM-ing monsters and two, the level up mechanics of D&D which pre-supposes only creatures of a certain level are deadly to you at certain levels.  Advance in levels, and the previously deadly monsters disappear like a bad dream from your world. Any orcs in the S series of modules? Goblins? Kobolds? Hobgoblins? not so much...

That's why in Roguish, monsters are going to be treated a bit differently.  More along the lines of TFT where monsters are always dangerous. Recently I watched the series "American Hoggers."  In it a family (with help) goes after wild boar in Texas.  Thinking back to the pig faced orcs of old, and watching how wild, deadly and destructive actual boars are, I have a new paradigm for using orcs in my games.  Now formerly pig-faced green skins, my orcs will be more boarish in appearance with short bristled hair.  They will be tough, deadly, able (and ready) to eat anything (or any one).  They will breed quickly and thus pose problems to all other humanoid races because of these.  As voracious eaters they are a threat, and as a fast breeder, their numbers swell quickly.   They will be tough and dangerous fighters. Oh..and no half orcs, that's just lame.  My orcs will be more like this: 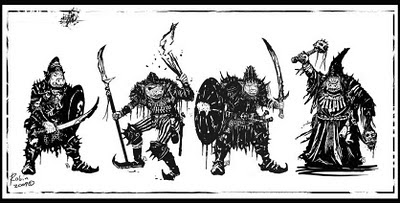 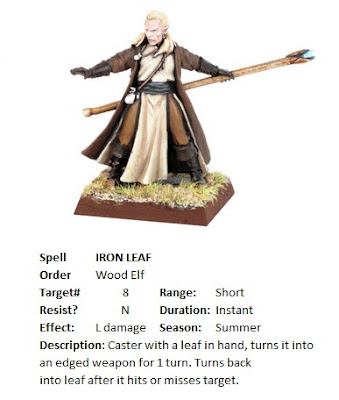 Here is a sneak peak of one spell in my Roguish Fantasy RPG.  Magic is one of the most difficult (for me) bits about designing (and for that matter playing) an RPG.

This is more true as I am specifically desiging Roguish to be old school in feel and style, while also NOT being another retro clone/OGL/d20 system.  There are so many (some very good) ones out already.  I can't say that Roguish will meet or fit your style of game play, I can only guarantee it will fit and meet mine.    The system uses 3d6 to resolve all game actions (combat, spell casting, resisting, tests) so the funny sided dice (as my wife calls them) will have to take a holiday when you play Roguish. 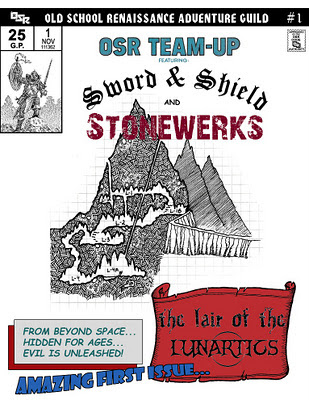 I am honored to announce I will be working with the talented A.J. of Stonewerks blog fame on a new project.  Our project will be an expansion and fleshing out of a previous adventure I posted, Pocket Full of Peril #7: Lair of the Lunartics.  Originally, I used A.J.'s unique hive like geomorphs for this adventure and posted it as a smaller part of the larger adventure I had made.

Now A.J. is using his talent and time to bring the full adventure to life...and to you true believer!  In the spirit of the Team-Up comics of yore, we've conceived of our own version: an OSR Team-Up! This is the first one, and we may even publish it in a comic book format!

A.J. is creating all new maps, as well as unique art (check out that wicked cool cover he made-outstanding!), and it will include full descriptions of the setting, the adventure, and of course expanded info on the foes!

Stay tuned for project updates on both our blogs as the Lunartics come to life! 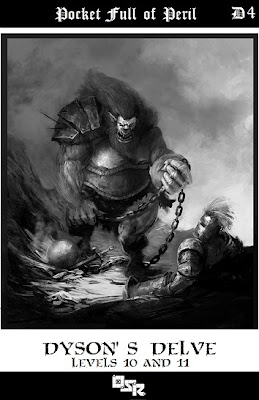 The final module in the Pocket Full of Peril edition of Dyson's Delve is now available for download.

This was a fun project and I really like formatting adventures in this manner. A couple things I learned and would change when going forward are:


1) Limit adventures to 2 maps and use more space for text or stats if using them.

2) Have an actual back cover. That will make it into an actual mini module!

When I use this format for modules for my own fantasy game Roguish I will apply these lessons, and any other suggestions or comments you may have.  Thanks for downloading the series and I hope you enjoyed them!

I plan on making an announcement tomorrow about a project in the works with another OSR blogger. 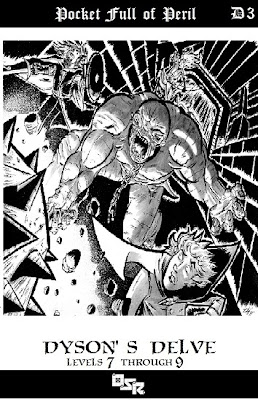 The latest, and next to last, PFoP module edition of Dyson's Delve is now available for download! Click on the PFoP Repository picture to your right to download it, or any of the other PFoP's you like!  There are 13 to choose from now, holy crap I put out stuff more frequently than WotC baby! (Sure it's not as good, but hey what do you want for free!)

I have one more DD Module to go which I will post next weekend!

My nerd wallet geomorph project will begin shortly, unfortunately the actual squares of graph paper are TINY--but hey who doesn't like a challenge!

Also, another project is starting to slowly take shape, I hope to share the details of it in the next few days.
Posted by Fenway5 at 6:46 AM 2 comments: