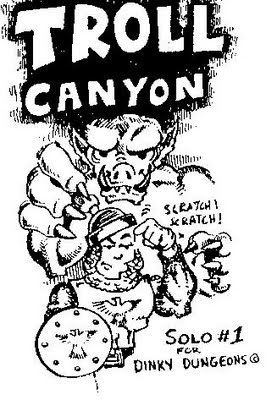 Way back in the 80's a friend of mine had these tiny little RPG books. I mean so small they were dinky! A small booklet roughly the size of a playing card and sold in a resealable bag. It was Dinky Dungeons! There were a couple adventures and a Dinky Kingdoms supplement as well. With 2 stats and 3 classes (one class was my most hated the bard) it turned out to be a hell of a lot of fun! Don't remember it? Check out a good review here.

In fact part of the inspiration for making the modules and supplements for my own game in a small pocketmod format comes from my fondness of the Dinky Dungeons unique packaging and presentation.

So after the flash back, let's flash forward A gentleman named Chris Nail is revising and reinventing Dinky Dungeons...I believe he is going to call it Dinky Dragons! The site is up and you can check out all sorts of cool stuff including a random character generator!

He has the beta version of his rules available if you contact him. Due to travel and work on my own game, I have not had the pleasure of playing his updated version yet, but the rules are as simple and far more interesting than the original! Definitely a great set of rules to get new people or young people playing, or just a fun night storming the castle.

Check out Chris' site, if for no other reason than to support another DIY gamer making his RPG a wonder of simplicity and creativity.
Posted by Fenway5 at 8:10 AM No comments: 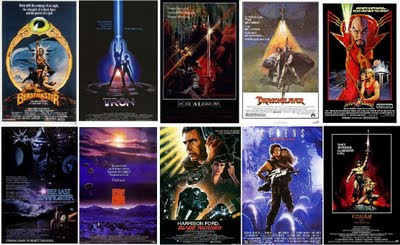 With the wife out of town visiting her dad, I have time to write and revel in my own top 10 list of 80's scifi/ fantasy films. You may disagree, and that's fine, you are wrong. Note, I am not including any films from the major series of the era Star Wars or Star Trek. My plan is to watch every single one over the extended holiday, and wallow in some classic films. Without further yammering, here it is:

#10 BEAST MASTER -The two ferrets were really cool
#9 TRON- Killer light cycle races and the tanks are still kick ass
#8 EXCALIBUR-Unforgetable armor and the music Carmina Burana is EPIC
#7 DRAGONSLAYER-Still one of the best and I'd like to see it remade
#6 FLASH GORDON-Absolutely love it and I know you just heard in your mind "FLASH...AAAAAHHHAAAAAAAH....king of the IMPOSSIBLE!" I had high hopes for the TV series, man that was a pile of crap
#5 THE LAST STAR FIGHTER- completely over looked classic that really deserves a lot more love than it gets. Grig is one of the best sidekick characters ever!
#4 RED DAWN - I am still awaiting my chance to hold aloft an AK-47 and shout WOLVERINES! over the burn out hulk of a Russian APC.
#3 BLADE RUNNER- Rutger Hauer wrote the last lines of the film his character Roy Batty says when he dies. How fraking cool is that?!
#2 ALIENS- Hands down the best scifi military adventures EVER, I can't think of a film that beats it.
#1 CONAN THE BARBARIAN - Let me tell you of the days of High Adventure...

Honorable mention that just missed the cut:
Clash of the Titans, Enemy Mine, Terminator, Legend, Ghost Busters
Posted by Fenway5 at 5:34 PM 2 comments: