Damn, Ronnie James Dio passed away today. Still blows me away how much influence RPG's had on the culture for such a brief window of time.

Originally as I worked on my fantasy RPG (Rougish) I had wanted magic tied to race.  Then as I tried to make it simpler and class based, I went to breaking magic down by school: healing, nature, etc.   Honestly I do not like it and it is part of what's made the game drag on in development.  So while I was mowing the lawn yesterday I thought a lot about the magic system...and I think I am going to back to each race having a spell book of sorts.

Culturally it makes sense.  There are many things known by locals that an outsider will have no knowledge of, and I like thinking that knowledge of magic would be an extremely guarded secret by the various races.  So an elf able to bring vines and branches to life would be quite magical to a dwarf...and an application that your average dwarf would have no use for.  Stone skin makes a lot of sense as a learned magic for a dwarf battling goblins in the tunnels of its home, but that kind of spell knowledge would not be developed or handy for a human who sails amongst the islands kingdoms of Harkuun.    One might say, throw them all up and let the player sort it out as part of their background, and clearly, players could do just that.  I think it gives the game a bit more flavor, almost in the B/X race as class manner.  The work continues...
Posted by Fenway5 at 8:00 AM 2 comments: 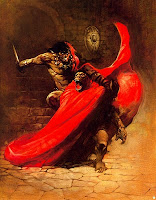 Before I knew who Frazetta was, in fact before I knew who Conan was, I knew I had to read a book with a cover like this. I bought my first Conan book, at a 7-11 in Lacey, Washington while our family was on vacation.  I did it based on the cover alone.

Never judge a book by its cover? Not a strictly true maxim when Frank Frazetta was the cover artist. Thanks Frank, because of your art, an entire world opened up to me.
Posted by Fenway5 at 5:19 PM No comments:

My younger brothers, me, and my cousin all rode our bikes up to the shopping center. My step-mom gave us each five dollars. It was summer, and the black bike seats were hot. The shopping center was a mile up the road, but on a bike you could get there pretty quick. We'd take short cuts and then only have to be on the busy main road for about the last 6oo yards.

My dad bought and built a model rocket and the weekend before we launched it. I couldn't believe how high up it went. It made me think about missiles, and nuclear war, and the Russians. Nuclear war was bad because everyone said so, but the missiles seemed pretty cool to me. At the shopping center was a hobby shop where dad bought his model rocket. It was next to the arcade.

We went into the arcade first and parked our bikes out front. Dad loved Centipede and always played it, his machine was right up front in the arcade. I liked Star Castle and Battlezone. I liked the graphics how they were line drawn. I liked trying to dodge the big cannon from the Star Castle. It was like beating the Death Star every time I could destroy the castle. Then I'd make my little ship do figure eights in celebration.

My brothers, my cousin, and I played in the arcade for awhile. We had to wait for my cousin to finish his game. We were told to stick together, so we waited. He finished, then we walked over to the hobby store to look at the rockets.

We walked in and a bell rang on the door. This old lady behind the counter looked up and said. "hello boys."

We all said "hi" and then we split up like marbles let loose into the store. I looked to my left and saw these books and boxes. "ESCAPE FROM NEW YORK" was on the top shelf and that looked cool. This mean guy with a gun and one eye was dragging this other guy behind him. I knew it was from a movie, but I could not see the movie. Man that game looked better than Bonkers. It was on the top shelf and I could not reach it. There was a pinkish box though right in front of me. It had this wizard lady and a guy with a spear on it. This huge dragon was attacking them. It kind of looked like the guy on the side of the Centipede video game cabinet. He was shooting arrows at the giant bug. That's why the Centipede game sucked. You didn't have a guy with a bow shooting, you had a snake head spitting stuff at the centipede. They lied about it with the art on the cabinet, and that sucked.

I picked up the dragon box. It was $10 dollars, and I only had $3 left after the arcade. I flipped the box over. What kind of game is this? No board, no pieces, just some books, a crayon, and some weird dice? I read the back of the box. You slay a dragon, find piles of treasure and then a black knight comes out and challenges you, what do you do? Oh man, I kill him! This looks cool, and there are over 100 monsters to fight? I thought of dracula, the wolfman, godzilla, dragons, maybe centipedes like the video game, unicorns, mutants, giants, the fish guy from the lagoon, heck I couldn't even come up with 100 monsters.

I had to play this. I took the box over to my brothers and my cousin. They looked at it and my cousin said that it sounded cool, but he did not want to read the book. I said I would read it. I'd learn how to play it, and then I'd teach it to everyone. We could all play together. With Atari you could only have two people play, and that meant two of us had to watch. Monopoly was dumb, Risk took too long, Bonkers was boring, the Slime monster game didn't have any slime left in it, and Boggle was dad's game. This was a new game we could play together.

Everyone walked back over to the game shelf. There was another book called "Sword of Hope" and these thin books called modules with giants on the cover and knights fighting them. These were cheaper than the box set. The old lady said you have to buy the box first before you can use the other books.

I put my three dollars in and my cousin put in seven. The lady put the box in a plastic bag. I slipped the bag handle through my handle bars. It was so hot out we were sweating when we left the shopping center, and the box banged against my knee while I peddled home. I hadn't slain a dragon yet, and I did not get stopped by the black knight riding my bike home either. I did discover a treasure though, a wealth that would last me all that summer and continues to reward me now.
Posted by Fenway5 at 8:06 AM 2 comments:

Hello my friends and mysterious acquaintances, and a tip of the hat to lurkers everywhere. Sorry I've not had the time I have hoped recently to write. I am still here, still nerdy, and still working away, just not on my own projects as I had hoped.

As I've made mention before, I happen to work for a game company. Technically I have a specific title and role. My own out pouring of new ideas and past experiences in retail often tap me to do not only my job, but additional projects. Recently a new project was launched and the time line for completion is...well to put it mildly "nuttier than squirrel shit."

The project is the sort of thing most companies would spend about a year putting together, we've had a little under 3 months. My own part in this is as "rented mule." Here is how it works: Super important #2 guy in the company has crazy idea and creates a time line not tethered to reality. Yours truly gets the unenviable task of trying to give shape to said wild ass vision, with my time line being, "this should have been done yesterday. Oh, and don't quit your day job, as your titular function is critical to our continued success." So myself, another hard charger in the same department, and 2 outside consultants (who are paid double the company wage) are putting this little dream together. For the visionary it is a dream, for the cat building it, its a nightmare.

I can hear you now gentle reader, "Waaaaaah, boo-hoo, you have a job so why are you complaining? it is called work for a reason, man up and shut up about it, who cares? Will you ever finish just ONE rpg you are working on? Damn what a cry baby!" All true to a certain extent.

Who cares? Well my wife and I do, and I am sure that is the extent of it. In the end having worked absurd hours daily and weekends to meet a deadline while still having to fulfill my normal work responsibilities has left me bereft of time to write or to attend to my blogs. My part in this project should be over soon, and after a vacation I hope to have the COLLAPSE rule book up.

Thanks for your patience and I hope not to have a lapse like this again. As Winston Churchill said, "If you are going through hell, keep going." That is precisely what I intend to do.
Posted by Fenway5 at 7:15 AM 2 comments: