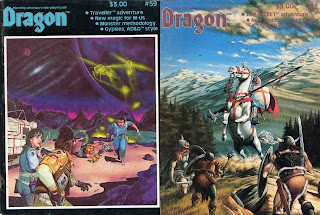 I wrote a bit about the importance of Dragon #62 to me.  I need to make a correction though, while #62 was the first one I personally bought and owned, Dragon #59 is the first one I remember reading.  Well really my younger brother Jon bought and owned it, but he did let me read it, and it stands out for being Traveler specific to me with giant glowing bees on the cover.

Okay in a fit of nostalgia I managed to score a number of old Dragon Magazines ranging from 57 through to 83 with a lot of gaps.  Fortunately the important ones to me were all in their such as 59, 62 and others I remember reading in the golden age.

So now there is a large stack of OLD Dragon magazines I am pouring through with all sort of flashbacks hidden on every page.  Maybe I am a secret Luddite, but there is something in paper physical form that electronic PDF's will never capture.  I am sure part of that reason is mental memory, but even more, modern PDF files mean little to me in comparison to owning a physical book. There is a difference in perceived value and frankly respect for material that the physical delivers that 11010101010101010111100011010101 fails to.  Okay I am climbing off my soap box.

So Issue 62 is important to me for a number of reasons:
1) I learned about Gang Busters, an RPG I would wish for and get Christmas 1982 because of the article in this magazine
2) I first learned about FGU's Aftermath! and Bushido (not V&V as I thought), two games I would covet because of ads in this magazine
3) WORST AD EVER: Task Force Games "Please sir may I have some more?" Oliver ad.  No games SHOWN, no fun, full page with nothing but a child holding an empty bowl asking for more.  Apparently he wants more fun, yet as is apparent by the ad, this child...and you...will starve!
4) I bought it (at Hood River Florist) along with TOP SECRET the RPG on our Spring Break trip to the beach.  Yes a Pacific NW beach. Which means, wind, rain, and grey skies, perfect RPG weather.  P.S. don;t let your youngest brother eat Better Cheddar's on any trip...heinous breath, orange fingers, nightmares still...

Side note, I think I made it to the H.R. florist maybe twice in my D&D glory days and I remember walking right past tons of flowers and glass refrigerated cases to find an old book/magazine rack filled with TSR goodness.  yes a florist shop...

So as I go through Dragon #62 I am discovering a number of things that from a historical perspective are very interesting, telling, and remain true to some extent I think.

First in DRAGON RUMBLES-Jake Jaquet goes over the 7,000 (so far!) returned paper questionnaire responses from a December 1981 Dragon Magazine.  '81-'82 is really the period when the D&D rocket took off into a full blown fad.  Ads in Dragon #62 highlight the Moldvay/Cook basic and expert boxed sets.  Not a single ad for anything Advanced D&D which is odd as most articles are centered on the AD&D game.  I think it reinforces the internal bi-polar problem of the Basic/Advanced trends in D&D that plague the game and its direction even now IMHO.

Back to the questionnaire, we find the following information:

Question-did that data foreshadow or fire-up the creation of Star Frontiers?  Did it come out fast (no star ship rules) to take advantage of this interest?

Question-clearly the role of rules is debated, but interestingly back in'82, there was still a frontier experience simply not as prevalent in today's codexed and cross referenced rule tomes.   I wouldn't say the war was lost as the OSR rebellion continues...

Okay now we flip over to the first question in Out on a Limb, the question and answer section.  In a nutshell, Hugh Weiler, of Worthington Ohio, loves the NPC classes in Best of Dragon II.  Hugh has tried in the past to play an Archer/Ranger or a bounty hunter character that have turned out to be just like a fighter or cleric in execution.  Hugh would like to know is there any chance of turning NPC classes into PC classes and publishing an additional Players Handbook, and DMG, to handle these options.

The response from Kim Mohan is, a simple "no. "


Okay Kim writes more than that...but really its justification:  NPC's are NPC's for a reason (Anti-Paladin, Berserker) they are their for character's to interact with.  In addition they (those of The Dragon) do not presume to alter the fabric of D&D.  To quote Kim specifically, "Classes for player characters are specifically defined and "limited" (though there is still an abundance of choices) in order to make the game system as a whole work properly."

I understand that The Dragon is not official canon, but they produce, discuss, and answer so much that in a sense a gamer reading it would take it as canon.  Sort of like the Pope talking about the Bible, he didn't write it, but he is the official interpreter of it for some.

In addition I am mystified that Mr. Weiler's ideas of a ranger/archer class or a bounty hunter class may (would?) somehow break the game system in Mr. Mohan's estimation.  I know Kim was speaking in generalities, and it may be simply a defensive corporate posture, even so it makes AD&D sound as brittle as glass.

And that's really (Dragon Rumbles and one Out on a limb question) less than one page of issue #62!  What other treasures, if any, remain hidden?
Posted by Fenway5 at 4:59 PM

Nice insight about the possible origin of Star Frontiers.

I remember that freaky Oliver Twist ad, too!

Back in the day, we used only one Dragon NPC as a PC: the ninja -- and to most of the other players, he was just a simple thief (who happened to like going out at night a lot...) I think we were all open to trying more, eventually, but we took a looong time to explore all of the standard AD&D classes and race/class combinations.

@Cygnys Yes that Oliver ad is the worst!

I agree as well, I never saw NPC's as verbotten and I think it spoke to the desire by people to be all they could be. Clearly the writers saw the opportunity, possibly need, for more varied character opportunities. That's the problem, and nature, of fences-we have a natural need and desire to leap them.