Freedom of choice, is what you got 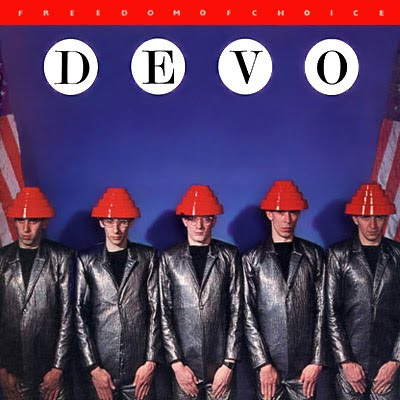 The notion of freedom of choice is a dear one to me. Beyond simply being core to my belief system as an American and responsible for our success as a nation, it is core to my beliefs as a Christian. Anything that seeks to stifle that innate spark I consider anathema to anyone's potential happiness and success in life.

I was inspired by a post over at http://bloodofprokopius.blogspot.com/

The (as usual) thoughtful post was primarily about how he uses monster stat blocks.

This particular part though sparked my response:

Challenge Level — Frankly, I've never used this. The players know quite well that I don't dumb down or weaken the monsters in places they have no business being. Characters have been killed for not running away when they should have. The game is about choices. When I present to them a monster, it is what it is. The characters are then free to try their luck and skill or to run away and then face the consequences of their choice.


The notion of choice and how one exercises it is core not only to the success of the game, but to every life, and most importantly was given to us as a gift from God. When a game (or more recently our own government) endeavors to make everything equal and fair, the first thing removed is freedom of choice. In the case of Challenge Level, I too have loathed this mollycoddling stat.

There are some beasts the characters should run away from and if they choose not to then they suffer the consequences...and they LEARN! Part of the the freedom to choose is the notion and experience of exploration. In the game exploration is not limited to simply roaming of ancient halls and dusty crypts, it is the exploration of the boundaries of heroism, cowardice, friendship, and exploring the limits of a persons abilities through a paper avatar and some dice. The game in essence is a vehicle to explore your own personality in fantastic situations exploring all sorts of choices that you may never make in real life with the only victim being a sheet of paper if the choices are bad.

The challenge level stat is a reflection of socialized system game play: Provide a system of regulated choice to try and insure the characters always have a better than average chance to succeed at the expense of choice.

This system regulates and controls the level of danger, challenge, and uncertainty to maximize character success if you used "properly."

By adhering to challenge level you remove the most critical element of exploration: freedom of choice. The Referee is then limited artificially as to what they should use in created challenges, and the players choice to fight or not is also removed. When you know you have a better than average chance to beat any encounter, then you always fight.

Choice is about risk, and with risk comes the chance to succeed spectacularly or to fail miserably. Both ends lead to some of the greatest experiences in both gaming and life. Rags to Riches...and Riches to rags. Any system that seeks to Remove or unnaturally limit that essential part of the human experience given to us by God seems as if it must be a sin of some kind.
Posted by Fenway5 at 7:56 AM No comments: