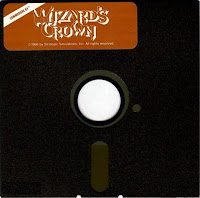 Here is a blast from the past-A Computer Gaming World 1986 review of Wizard's Crown!  Of note, look at how long the review is-i love it and wish this were still the standard! Anyway, read it and see if it fires your interest! Of note this is the combat system that later powered the gold box series...
Wizard's
Crown
by Scorpia
A circlet of gold, studded with jewels, and surmounted by a brilliant crystal. A source of immense power. The cause of a catastrophic civil war between wizards that laid waste to a city and brought evil to the land. For five hundred years, the crown has remained hidden in the stronghold of the malevolent wizard Tarmon, whose lust for power brought about the downfall of the Fellowship of Wizards. Now, the time has come for the crown to be returned to its rightful owner. The challenge has been given; only the bravest and most resourceful
of adventurers will succeed in the quest. As dawn comes to the town of Arghan, eight hardy souls step forth from the Crossed Swords Inn to meet that challenge. The quest begins....
A difficult quest, as they usually are. Starting with the minor "monsters" of town thieves, muggers and assassins, you progress to the great outdoors, the ruins of the elder city, destroyed in the wizard's war, inhabited now only by creatures of evil and darkness. Fighting your way through the endless hordes of monsters, you will explore the old Thieve's Guild, the mansion of a long-dead (but not departed) wizard, and, finally, somewhere in the wilderness, the castle of Tarmon himself. It will take awhile before the crown is safely returned to
the city.
You'll need both muscle and magic to see you through, and fortunately they are available. Up to eight characters can be in the party, and the full complement is definitely recommended; a lot of MEAN critters are roaming around out there. You can form the group from the characters already included on the disk, or make your own, or any combination. I found that the pre-formed party was very well-balanced, and in fact I finished the game with them instead of creating my own. Don't let that stop you from experimenting with your own characters, however; you could come up with come very potent combinations.Characters can be single or dual-classed, and it's wise to have dual-class members in the party. They won't advance quite so quickly, but they become more and more valuable as time goes on. Classes available are fighter, ranger, thief, priest, and sorcerer, and you can have a character with any combination of those, subject to minimum attribute requirements. You should have at least two priests and one thief in the party; priests can heal wounds and raise the dead (very important); thieves are good at searching, disarming traps, and haggling for good prices when you sell unwanted equipment.

In the dungeon, things are a little bit different.It's all done close-up, like detailed combat, with the individual party members represented by their icons. And this is where a problem crops up. The problem is movement. When you first enter a dungeon (or a new dungeon level), you choose the party member who will be "active". This active character is the one who will respond to the movement commands; all other party members will follow that one automatically. It sounds good, but often you will find party members getting stuck behind walls. When this happens, the only thing you can do is set everyone to "independent" status (meaning they don't move at all), and set the stuck ones (one at a time) to active status, and move them away fromthe obstruction. You can end up doing a lot of these maneuvers unless you're really careful. Fortunately, when you go up or down a level in a dungeon, everyone in the group goes along, regardless of what movement status they have. This is helpful when travelling through known areas; you make one member active, all the rest independent, and then move the active one as quickly as possible to the stairs. It's a great time-saver. Another drawback to dungeons is the inability to set up for combat. When an encounter occurs, it happens right then, right there, and you must fight
as-is; you have no opportunity to change positions until after the combat has started. This could be a problem if your weaker members happen to be bunched up near the front, and your fighters are in the back.

Experience, is difficult to come by, and this makes advancement slow, especially for dual classed characters. There are no levels in the game, just gradual improvement of skills and attributes (a much more sensible way of doing things). Killing monsters is the only way of gaining experience, and you do need to waste a good many of them to get a decent amount of points. Each time you return to the Crossed Swords Inn, you can exchange experience points for skill improvement. Each skill requires a certain number of points, and the increase is randomly determined, depending on how far you've advanced. For example, it costs four experience points to increase sword skill. If the skill is currently under 100, the increase will be somewhere between 1-8 points. When the skill reaches 100, the increase will be only 1-4 points. At ability 150, increase is only 1- 2, and at 200, only 1 point. Now let's take a look at the world. You begin at the Crossed Swords, with either the original party or one of your own design. Leaving the inn, you find yourself in town, near the front gate, with a
small double-icon representing the party as a whole. The icon can be moved in any of eight directions by pressing the appropriate number (a small rosette is displayed at the lower right showing which number corresponds to which direction). The town has a number of establishments: temples, where priests can restore their karma (needed for spells); shops that sell various items of equipment; taverns, where you can pick up valuable info and reduce morale loss; a market, where you sell treasure; an armory, with weapons and armor (only
ordinary) for sale; a park; a cemetery; a wizard's mansion (they will improve any magic item for a fee); and a training ground for skill improvement.

Outside Arghan to the south are the ruins. Here monsters abound, and encounters are frequent. The further away from the gate you go, the nastier the things you will come up against. Fortunately, there are a few temples out there, where you can safely stay for awhile and rest up, provided you know the word that opens the door. At the beginning, stay in town. You are no match for the creatures roaming in the ruins. Most especially, read the manual thoroughly. It contains excellent advice, and you should pay attention to it; you'll live longer that way. In fact, read the manual a couple of times before you boot the game, so you know what you're doing. Combat is generally straightforward. Always eliminate the more powerful monsters first. Usually these will be enemy spell-casters, who can make real trouble for you if you don't get to them fast. When fighting at night, cast a Foxfire spell as soon as possible; visibility is greatly reduced in the dark. When you're up against the likes of Undead Warriors, always get off a Reveal Enemy spell; Warriors are usually accompanied by ghosts and such who will often be invisible at the start. Vampires are especially nasty, since they reduce life points directly upon touch, and most of the time you'll have to rely on your priests to get rid of them, although they are killable (it takes awhile, tho). The dungeon levels have set encounters. Monsters will be found in specific places, and once killed, they will not reappear. This is handy, as the dungeons are certainly the most difficult areas of the game, and cleaning then out is a long and hard task. Do one level at a time, and go back to town in between. Remember that you still have to fight your way back to Arghan, so don't use up all your resources in the dungeon (no saving there!); you may be too weak to survive in the wilderness. Also, make sure you go over every spot on every level; you will find some interesting items, and also pick up some very valuable information.

Tarmon is exceptionally hard to kill. He is also surrounded by a small army of demons, just to make things more difficult for you. It is quite likely that one or more of your party will die before you finish off Tarmon, so do your best to keep at least one priest alive through the combat. You should not attempt the final level of Tarmon's stronghold until your party has the best possible armor and weapons (but do NOT, under any circumstances, hit Tarmon with a magic weapon; it will shatter), your sorcerer is at maximum power, your priests at maximum karma, and your party generally at maximum skill abilities.

My one quarrel with this game is that the emphasis is very heavy on hack and slash. The puzzles, such as they are, are pretty trivial. There is no interaction to speak of between the party and anyone else. In town, you either buy or sell, both of which are mechanical actions; outdoors, everything you come across is hostile and must be killed. It does tend to get a little dull after awhile. Still, the
game has many interesting features of its own, and should not be overlooked on that account. Bottom line: Recommended, although a little less hack and a little more puzzle would have been better.
Copyright 1986 by Scorpia, all rights reserved.
Posted by Fenway5 at 7:45 PM