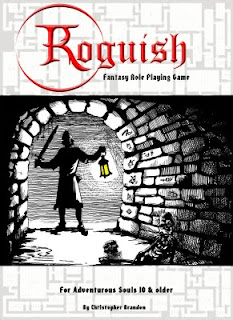 Well I am pleased to say I made my goal of creating a sample PDF  of my Roguish RPG available before the end of November!  You are now able to down load the 8 pg pdf from Geekdo!
In 6 pages of rules you will get a feel for the basics of the system, and a short intro adventure is included and will let you try the game play out.  I look forward to your feedback.
Happy Thanksgiving!
Posted by Fenway5 at 2:00 PM 1 comment:

When you reward an action, it will cause people to do that action more.  Traditionally in the early years of "roll" playing, looting and slaying were the primary methods of leveling up your character.  I like looting and slaying, in games mind you, quite a bit, the difficulty arises when these are the core ways one levels up their character, this becomes the paradigm for all adventure creation.  So developing a story line and rewarding people for advancing plot elements with something other than a blade's edge are not tangible rewarding to players. I kill creature X, to get experience reward Y.  I loot treasure A I get experience B.  Basic, but honestly kind of boring and it can get quite convoluted in trying to compute it.  Worse crunching numbers after a battle to reward XP can take players right of the game and slows adventure momentum as well as game play.

As gaming advanced the emphasis in many games shifted to "role" playing.  Epic plots, intrigues, and multiple sessions where combat might never occur.  Rewarding a player for good "role" playing though is somewhat subjective and in my own experience, can lead to internal party or group friction.  This is also a difficult method of play for those who dislike theatrical pontification in strange not quite right accents.  Does the showiest most theatrical person deserve a bigger award than the quiet guy who just wants some thing to slay and loot? If you reward "role" playing than those who dislike showmanship will be turned off from playing.


Lastly, I never like the XP division by class to artificially limit and make advancement more difficult for some and quicker for others.  It is an artificial social leveling to insure some character classes who are seen as too powerful within the game are held back.

Okay, in that brief overview you know what I don't like and why.  So how do I have it set up in Roguish?

At the end of an adventure you are awarded a combination of 1,2, or 3 XP.  Any class needs 10 XP to raise to the next level. Maximum reward is 5XP at the end of any adventure.

Yes it is a little vague on purpose.  Generally most folks will get 3-5 pts.  Some who helped, but were also a bit of a drag on the adventure will get a 2, and the participant award player who generally was a pain in the ass probably gets 1.

So it will take 2-3 adventures in general to raise a level for most players.  I don't know about you, but finding time to complete 1 adventure a month is difficult.  and this XP system I think will help foster return play because you can level up quickly.  Second, the level grind issue goes away and the game becomes more concerned with participating in the adventure.  Treasure is its own reward so is not counted in as an XP reward. This system should take advantage of any players particular ability without giving a specific reward for slaying the dragon, or out smarting the troll at the bridge.  Both, in this system, are equally valuable.

The Referee and the players are ( I hope) freed by this reward system to focus on playing the game, not on tracking who killed what or who role played the best.  It also mean stopping to figure out XP after a battle goes away, increasing immersion in the game and speeding play.  It is simple and easy to pick up for new referees and expert referees can change and use what ever system they like.
Posted by Fenway5 at 8:57 AM No comments: 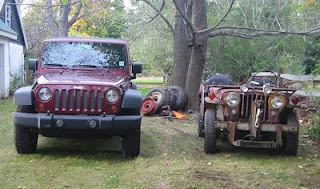 Sure I just passed my 40th spin around the block in our solar system, but just as awesome (maybe more so)-my favorite vehicle of all time the Jeep hit 69 today.  God bless you Jeep, 69 years later and you are just as bad ass as ever.  The Jeep is just a classic vehicle and no matter what they do, they just can't  frak  the original up.  Whether its the original, or one off the line in 2009, its just as kick ass as ever.  Somethings are done right the first time and overtime only modernizing tweaks add to what's great but can't really improve it.

Sure, but what does that have to do with gaming?  A lot I say.  I want my Roguish RPG to be Jeep like.  Simple, solid, relaible, and flexible to get you wherever it is your imagination wants to go.  The jeep isn't flashy, it won;t stop traffic, and it won't win any beauty contests.  It does have thousnads of optional parts you can buy to customize it and make it your own.    You get the base Jeep, and then you can jack it up, lower it, add fog lights, a hard top, safari top, roof rack,  or do whatever you want to it.  No matter how many options your throw into personalizing your Jeep, everyone still recognizes it instantly as a Jeep.

So with Roguish the RPG that's what I want to deliver, a Jeep of a fantasy game.  Simple to start, easy to play, take you anywhere and room to make it the game you want it to be.
Posted by Fenway5 at 5:19 PM No comments:

So in expectation of an upcoming play test of Roguish, I have decided to make clerics in the game NPC's and not a playable class. Here are a few reasons for this:

1) I really dislike the over abundance and focus in RPG's on deities & demigods. I realize I may be alone in this but as a function of the game world it simply never interested nor entered into our game play. Creating weird pantheons or cults as a foil to the characters was fun but worrying about when the cleric is going to find time to sacrifice goats to Thor? Not so much...

2) Clerics as NPC's serve as excellent foils or hirelings for the referee to use to progress, start, or create plot twists in a story.

3) I never liked the cleric as spell caster. Any boon or miracle granted by a god I believe would have more to do with the faithfulness of the clerics service then simply, you are level 2 now you cure wounds twice daily sort of thing.

4) Clerics are traditionally more often stationary than wandering. Not strictly true in all cases of course, but more often than not, it is true. Why does a the priestess of Isis want to battle the Hill Giant in the caves of doom? Yeah I am not sure either. But the players hiring a priestess of Isis to transalte for them in a foreign land provides all sorts of interesting plot twists for a clever referee to use.

5) Lastly, I think breaking up traditional cleric type spells and abilities into different classes makes for more interesting options for players long term. So a healer as a separate class makes sense, as does a witch hunter with the secrets of vanquishing evil and turning the undead.

The good news as with any game, if you want to create a cleric class when playing Roguish, feel free!
Posted by Fenway5 at 7:18 PM No comments:

New Art and a major hurdle ahead

A big test of my Roguish RPG is upcoming as two of the most brutally honest critics I have try out the latest version of the game this weekend. Those critics are my younger brothers. Although with my 40th approaching next week and my brothers and I within a few years of each other, I am unsure young fits anymore. It's fun to think we have been gaming together for 30 years now. Damn, that does not make me feel old, just blessed!

Anyway we grew up playing RPG's together and they both have enough experience and interest to let me know the truth, and if it stinks on ice, they will happily let me know. Barring disaster, my goal is to have a micro 8 page sample version of the rules available as a free download in November. My expectation is of the full game releasing in January of next year.

Also some fantastic new illustrations were completed this week for Roguish. I am very happy and honored to have a terrific number of illustrations from Mr. Richard Luschek. I specifically requested the illustrations be of scenes in silhouette. His illustrations bring a scene to life, and leave a lot of the details to your imagination to fill in which is the aspect of gaming I enjoy the most. Richard's illustrations are a perfect mirror of that sense of wonder.

You can catch a sneak peek of some of the recently finished illustrations on Mr. Luschek's blog.
Posted by Fenway5 at 6:07 AM 2 comments: