IRON MAIDEN that is!  New feature, every Monday I am tossing up a favorite Maiden tune because damn those guys still rock! UP THE IRONS!

So here is another cool strategy card game we have started playing frequently.  A two player starter deck can be had relatively cheaply!  Good mix of strategy and fantasy gaming.  I'd review it for you but it's Sunday night, we finished playing it twice, and frankly I need a lot beauty sleep because brother I am not getting any prettier.

So here is a video review of it that breaks it all down.  Note This cat's voice (to my ear) is pretty annoying, but he does review it quite well.

Just a quick note to say 3 brand new cards for Iconica are for sale!

The Brew Master looks like a new favorite card for me!

Not playing Iconica yet? A complete set of all 22 cards from the first release (including extra pieces so you can play 4 player) is NOW available.  $50 for the complete set of cards + extra bits. Crap I wish this was available when I purchased originally!


Iconica is definitely worth  a look! You can scroll down my blog and see my quick review below.  Only 4 complete sets show available right now in Eric's store... 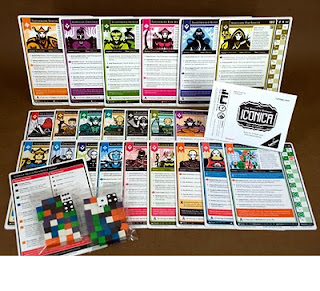 The COLLAPSE is coming 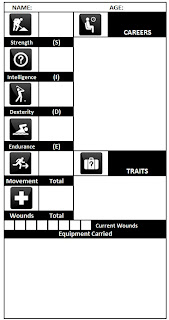 What a busy week!  Monday was crazy busy at work, Tuesday I lost my hearing watching Dream Theater and IRON MAIDEN blow the doors off the joint.  My ears were ringing for 2 days straight!  Wednesday was a 12 hour day in the office (after 4 hours sleep), and then dinner with the boss after work that night.  Thursday was BASEBALL: 13 innings in the sunshine of Safeco field.  Whew I was spent and passed out at 8pm last night.  Fortunately I had Friday off, and managed to knock out some more good work on my Apocalypse RPG: COLLAPSE.

Unlike Aftermath! or Gamma World, COLLAPSE concerns itself with  starting during a Collapse, then playing it out .  It will be very open ended as to why or how a COLLAPSE occurs so an Administrator (GM) can do whatever they like.  It is a very simple system so the game play and mechanics do not get in the way of creativity or game play.  Old school style w/o being a D&D derivative.  Actually I'd say its more a mashup of Car Wars, Traveler, and Barbarians of Lemuria.  Note I am not claiming its anywhere near as good as those games-but it is inspired by bibs & bobs of those fine games.

The image to the left is the Character sheet.  Simple and clean plus I think the pictograms are a neat hook.  Anyway, the player sections are done.  There are 3 chapters: Basics, Character Creation, Combat.  Toss in a table of contents and a character sheet and its about 44 pages.

I'm unsure if there should be an equipment section really as it is modern times and since the game starts (ideally) in medias res, its not like you have a back pack full of stuff handy.

Example: One COLLAPSE scenario kicked off with everyone working in the same office.  You hear a strange sizzling noise then the power goes out, you see the sky turn a strange reddish orange outside and everyone grows quiet.  You rush to the window to look out and you see every car has stopped and is slowly rolling to a halt below you.  Six planes drop out of the sky slowly spinning towards the ground.  A few hit the water and a few hit portions of the city. Each crashes with a fiery boom which shakes the office tower you are standing in...what do you do?
Posted by Fenway5 at 2:56 PM 3 comments:

The World of Rynaga: Iconica 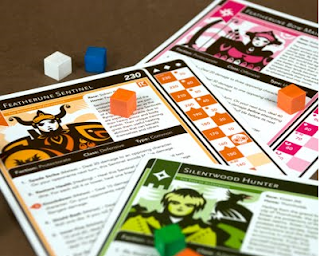 I picked up a new game about 2 weeks ago and finally had the chance to play it last night.  It's called Iconica and it is set in the World of Rynaga.  Rynaga is a very stylized and interesting world that seems to be developing into a full blown fantasy world. Iconica is the first game set in this world. The world, game, and art are designed by Eric Torres, and all aspects are brilliant.  I'd really like to see a great company like LPG work with Torres and develop a generic OSR RPG world book using Torres art and setting.  Torres has created a world book which tells a story in almost postcard style snapshots and is filled with his glorious art.  Back to the game though.

Iconica is a sort of RPG card based strategy game...but each player only uses three cards.  From the Website:

Set in the fictional World of Rynaga, Iconica blends turn-based strategy with a twist of chance for a unique card game experience that's easy to learn, but a challenge to master.

Start by choosing your cards. Choose wisely, as each character comes with it's own set of strengths and weaknesses. There are several card types such as Defensive, Offensive, Adaptive, Disruptive and Supportive.

Once you've chosen the cards that will make up your hand, it's time to face off against your opponent. Dice rolls may add an element of chance, but each turn presents you with strategic options that represent the core of Iconica's gameplay. Other elements such as Final Acts, make for exciting game events and can be the difference between victory and defeat.

I can vouch safe, the game play is strategic, intriguing, and fun.  Each character has 6 different abilities on its card. You roll a d6, then whatever number is rolled you may select that matching numbered action from one of your three cards.   Your goal of course is to slay your opponents 3 characters.

As your character suffers damage it unlocks various new abilities these abilities change as more damage is suffered thus creating another level of strategy and chaos.  The variety of powers and abilities is remarkable considering the base set comes with 6 cards, dice, rules and markers.

I originally thought the limited card selection (3 per side) would lead to a lack of variety, but even using just the base 6 cards, an amazing amount of strategy is possible.  Adding in the additional characters only increases the team building possibilities and strategies.  At the same time, the limited card set one must manage keeps the game approachable and teachable.  My wife an I played 3 games last night and each game was quite different using just the base 6 cards.  While common TCG's are of no interest to her due to their complexity of interaction, Iconica allowed these same kinds of strategy in a more palatable bite size portion.  The initial game took about 75 minutes as we learned the rules and she analyzed her options.  The next two games came in a bit under an hour each.  I think 2 experienced gamers could knock out a game in 45 minutes easy.

The cards are gorgeous and evocative as you can see in the image.  They are 5x7 in size and of very good quality.

While it is a type of collectible card game, it is not a blind purchase model.  Instead you can purchase just the cards you want.  Additional cards are available now and can be purchased for $2 and up.

I highly recommend this game if you like strategy games, TCG style games, or the idea of Collectible Card games but without needing a suitcase to compete.  A solid 8 out of 10.
Posted by Fenway5 at 7:57 AM 3 comments:

The Summer MUST READ 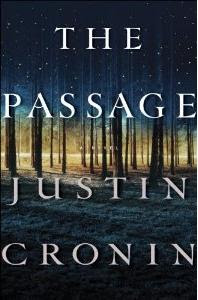 The Passage by Justin Cronin

I spent most of this week in Vegas for the licensing show.  While I do enjoy Vegas when I go for a weekend with my wife, when its on business, its could be anywhere on the planet...with 40% more T&A and drunk people.

Anyway, besides the good business meetings, I starting reading The Passage.  I hate air travel, and frankly it's pretty sad that various airports and even gates in airports are now as familiar as the grocery store to me.  blah.  So I started reading The Passage and quickly became absorbed enough to pass 1.5 hours waiting for a flight and 2+ hours in flights both ways completely engrossed.


It is a "world collapse" novel...and the best description I have seen is its like "The Stand" by Stephen King mashed up with "The Road" by Cormac McCarthy.  Frankly, I have not ever (and am unsure I ever want to) read a novel as grim as "The Road" again, but damn it is one terrible and beautiful work of art.  I am unsure I want to see the movie because as much as the novel still haunts me, I just don't want the movie to ruin or take away from the broken jaw feeling the book left me with.

So The Passage, well, I am not quite sure it is as good as the "mash up" description, but I am 33% through it and can't put it down.  It's more like "The Stand" than "The Road", but I don't see that as a negative at all.

So what's the story all about? How does the world end and why?  Brother I'd be doing you a dis-service if I told you.  If you like The Stand, The Road, Day by Day Armageddon, or The Walking Dead...do yourself a favor and pick this new novel up!
Posted by Fenway5 at 6:33 PM 1 comment:

I have continued work on my COLLAPSE rpg.  Like most games I enjoy it is gritty and not fantastic. COLLAPSE concerns itself with the breakdown of modern society based upon whatever scenario the Administrator chooses.  It could be financial collapse, zombies, pandemic, EMP, war, etc.  Rather than 100 years in the future, its more about the here and now, everyday people dealing with a world turned upside down.

One could conceivably add tentacled, eight eyed, crab clawed mutants to it, but frankly there are other games, Mutant Future comes to mind, that already do this and better.  Although there are section on Zombies or Aliens causing a COLLAPSE event, they tend to be more gritty.  So in COLLAPSE a zombie scenario is inspired by the novel Day by Day Armageddon and the Walking Dead comic.  Alien invasion is akin to War of the Worlds or Invasion of the Body Snatchers, and military invasion scenarios inspired by Red Dawn.

One area I am having difficulty with is whether or not to add secondary ratings dealing with character psychological make up.  Rating things like empathy, ambition, integrity, charisma, and stability.  The psychological components are critical in surviving and interacting with others.   Yet creating stats to handle them seems like both a blessing an a curse.  It creates a touchstone for both player and administrator for figuring out character interactions and reactions, as well as their personality. Yet it also pigeonholes player flexibility and limits a character to certain actions or reactions.

I really dislike alignment systems, yet this seems to be what I am creating just with a different coat of paint more reflective of the style of game I like.  I have two different versions written, and can;t really say I like either.