Fear of the Dark

One of the oldest fears of man is of the dark.  What lies out there in the darkness beyond the fire's light? It's a primeval fear that remains with us regardless of time period or technological advances.  In fact depending upon the historical era, what man feared in the darkness  seems to have changed. Whether from wolves or witches, bears or bandits, the darkness has birthed many a monstrosity both real and imagined.

Man's battle against the dark is a never ending one.  From protecting one's kith and kin against what may come in the night, to creating method's of pushing back the darkness by creating new ways of making light.  We still today bar doors and windows despite our homes, streets and cities being flooded with light...yet the darkness still clings to the corners and edges, never truly defeated-only at bay.

There is a brilliant "history of darkness" entitled At Day's Close by A. Roger Ekrich which looks at man's historical relationship with the dark: what did man do when his available light was limited and how did he live with the dark in ages past? What were his fears, real and imagined, and how did he combat and defend against them?  It is a fascinating journey into our relationship with the darkness.  When light is only a finger flick away, why do we still fear the dark?  And if there is nothing to fear from the dark, why do we try so desperately to light every corner of our homes, streets and cities?

I will be the first to admit, as a product of a technologically advanced society, I never truly used the darkness properly when gaming.  When  every switch or knob in the modern home is in effect a "light spell" how can I effectively portray ancient tombs, dusty dungeons, and overgrown graveyards? In gaming terms, it was simply dark-then someone cast a light spell, fired a torch, or lit a lantern and that was that.  I have a new found respect for what darkness means in an age when fire for light and warmth could as easily mean burning down your house or city. Where a farm or house with lights on stood out as a beacon and invitation those who rely on the darkness to prey on others.  Where the night watchman was as likely to be a participant or look out for crimes in the dark as he was to be a protector or at least early warning system.

What use is archery in the dark? None! You have to close upon your enemy and meet them at a sword's length.  When you are weaker than your opponent (goblins? kobolds?), darkness serves to at least even the odds if not give you the advantage.  A light in the darkness tells me where you are, but further blinds you to where I am.

I think too often I have failed to properly handle light and darkness in a dungeons depth.  You have to see to fight...and if your opponent does not need to use a light to see...then those that do are at a complete disadvantage.  The party will be ambushed, and their light provides a target for an archer to fire at. If that light is lost...they become lost as well.  We see this today as night vision armed military units are able to decimate at little loss to themselves an opponent who must rely on light to see.  I never liked the trope of playing by candlelight, but am considering doing so if only to illustrate what darkness and light mean.

How do you approach darkness in your games and settings? Are your players afraid of the dark?

1 : not dependent: as a (1) : not subject to control by others : self-governing (2) : not affiliated with a larger controlling unit b (1) : not requiring or relying on something else : not contingent (2) : not looking to others for one's opinions or for guidance in conduct (3) : not bound by or committed to a political party c (1) : not requiring or relying on others (as for care or livelihood) (2) : being enough to free one from the necessity of working for a living d : showing a desire for freedom
Posted by Fenway5 at 7:26 AM No comments: 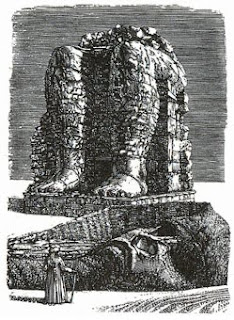 One of my favorite poems is Ozymandias.  Not just the more well known Shelley version, but I'd say even more so the competing version by Horace Smith.  Both are below as inspiration and you can decide which version speaks to you more.

As a historian the rise, fall, and rise again of man over and over throughout history is intriguing.  Most notable is that at man's zenith in any particular civilization, he becomes arrogant and assumes his sliver of time on the top in a given age is the pinnacle of human existence and that it shall never end.  History shows time and again that is not the case, as a collapse inevitably comes, and man must find his way again through the wilderness.

In both versions of Ozymandias each poet deals with this arrogance of man and civilization in a different tone, yet both are evocative and powerful for different reasons.  It's the individual poets focus that creates a different sense and emotion for the reader.

So how does this apply to gaming?  Consider the lowly dungeon.  Though not always the case, in general it is a ruin from a past time being explored.  The Referee should consider if those who came before were at the height of their civilization?  In an ascendancy cut short?  Were the builders the result of a race in hiding or survival mode during their decline?  When you decide at what point the builders constructed their dungeon, then that will influence what is found by the new age explorers as well as color how you present the dungeon and how the builders present themselves to the players exploring.  Without further rambling-the poems:

In Egypt's sandy silence, all alone,
Stands a gigantic Leg, which far off throws
The only shadow that the Desart knows: --
"I am great OZYMANDIAS," saith the stone,
"The King of Kings; this mighty City shows
"The wonders of my hand." -- The City's gone, --
Nought but the Leg remaining to disclose
The site of this forgotten Babylon. We wonder, -- and some Hunter may express
Wonder like ours, when thro' the wilderness
Where London stood, holding the Wolf in chace,
He meets some fragments huge, and stops to guess
What powerful but unrecorded race
Once dwelt in that annihilated place.

I met a traveller from an antique land
Who said: Two vast and trunkless legs of stone
Stand in the desert. Near them, on the sand,
Half sunk, a shattered visage lies, whose frown
And wrinkled lip, and sneer of cold command
Tell that its sculptor well those passions read
Which yet survive, stamped on these lifeless things,
The hand that mocked them and the heart that fed.
And on the pedestal these words appear:
"My name is Ozymandias, king of kings:
Look on my works, ye Mighty, and despair!"
Nothing beside remains. Round the decay
Of that colossal wreck, boundless and bare
The lone and level sands stretch far away.

Additional Note:
There was a solo adventure The Security Station from Metagaming for TFT that dealt with this idea quite well.  Sort of an S3 for the Fantasy Trip...
Posted by Fenway5 at 12:01 PM 3 comments: