TFT Basic Set that was and wasn't: Dragons of Underearth 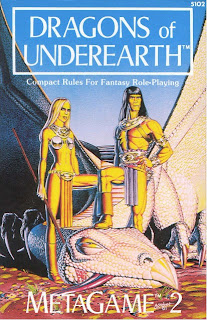 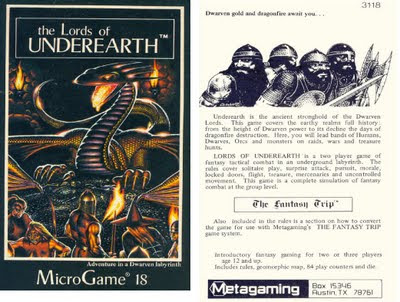 The Lords of Underearth is a unique and fun war game, and I suppose if your gaming style consisted of parties of adventures battling hordes of goblins, orcs, or other beasts in company sized units then a mash up with a FRPG is certainly a lost treasure.  Perhaps this sort of thing could have been invaluable to say an avid Birthright player or to the players who wanted to run their own kingdoms and have their party of characters involved in mass combats.  I never understood that need myself, but I'd never turn down another tool in the old gaming toolbox.

Back to Dragons of Underearth, while it is a basic FRPG based on TFT, its' pretty clear it's goal was to serve as a bridge to the Conquerors of Underearth product.  This again seems like yet another Metagaming mistake.  Where TFT became too complex and rules/ exceptions heavy, Dragons scaled back (too far mind you) to the core basics of the system presenting a simplified (and unfinished) core FRPG system.  Yet it's apparent goal was only to set up the basics needed to get into playing Conquerors.  I make this assumption based on two sources: The Dragons of Underearth rules which mention Conquerors multiple times for reference and rules expansion.  Second, from the designer himself commenting on it.

What a waste.  As Thompson did not like the direction Jackson took TFT, and Dragons seemed like the potential product Howard originally envisioned TFT to become, it's sad to think of Dragons as a bastard "son of TFT" meant only as a bridge to some other game. I created my own version of what a basic game might have looked like with Heroes & Other Worlds.

Below posted are the Dragons of Underearth designers notes from Interplay #8.

The problem with TFT was the same as all the other really great microgames (two problems really).

2. Commercialism. No one (except me) was going to buy the same game more than once. How do you keep making money, if you can only sell the product once. Solution, more rules, so you can sell more.

I think your comments are true up to a point, and certainly are based on RPG industry history.

That path may serve to create product bloat (ala AD&D 2e) but it does sustain interest in the base product line consisting of just a few core books and does not necessarily have to mean rules bloat.

In the age of PDF's and print on demand products where no one needs to sit on inventory this may be a better way to make a rules lite game work-at least that's my hope with my Roguish RPG!