Pocket Full of Peril #7: Lair of the Lunartics 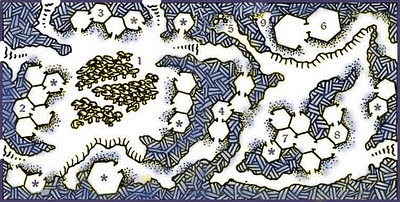 People in the small  villages around Mount Lepos have an ongoing problem, their folk are disappearing during nights of a full moon.  Worse, occasionally they come back with a misshapen neck and back, gaunt, stumbling and feeding on the flesh of any they find.  Mount Lepos is a notorious site filled with caves, ancient mines, hives of goblins, and strange creatures no man can name.  What is abducting the villagers and can it be stopped before the next full moon?
I ran this using my Roguish RPG system and its become something of a "Hive Crawl" at this point.  For now I'll post this first level PFoP version.  All the wicked cool hive geomorphs were made by Stonewerks and you can find them by clicking the link.

The Lunartics
The Lunartics in my game are an alien species that have been stranded for ages inside of Mount Lepos slowly growing in numbers.  They are now venturing out and using hive leaches to create zombie workers to dig new areas, or food for this brood.  The lunartics themselves look like pale gray/white upright walking ticks.  Huge bloated abdomens that are inches above the ground. The top short arms are used for feeding and grasping things up close to their poor vision eyes. The longer middle arms are used to hold tool or weapons, and two large power full legs propel their bodies uprightly like a humanoid.  The lunartics feel vibrations in the air via antennae,  through their feet, and through millions of small spiny hairs more than they actually see things.  So things like invisibility or hiding in shadows serve no purpose if the person doing these things is also moving.

There are lunartic workers who use a bite or claw to defend themselves.  Their carapace is equal to hardened leather or scale armor. The lunartic warriors use spine throwers which are sort of a shotgun firing d6 darts. These are fueled by a strange spiney larva.  In addition they use spore "grenades" which are a fungal growth that when broken does one of 3 things: Fails, creates a choking gas cloud, or creates a poison gas cloud.  This is determined by the age and moisture richness of the spore. They fall back on using dual wielded sharp dagger like knife hooks which grow from their claws and mark them as warrior caste at birth.  Their armor is also harder, like chain mail when young and plate mail when veteran.

Hive Leaches
The hive leaches are slow moving centipede like creatures which glow faintly in the dimness.  They range from a 12 to 18 inches in length.  They bred as food by the lunartics and secrete a mind altering fluid that effects humanoids by turning them into zombies.  A hive leach when attached to a humanoid well first paralyze, and the slowly feed off the victims spinal fluid until the back breaks and the victim is crippled.  This usually takes a few months.  In the meantime the victim is kept alive an nourished by the hive leach producing a protein based saliva that keeps the subject alive and also "zombifies" the victim.  The lunartics turn these victims into simple miners.  When threatened the hive leach secrets an adrenaline into the victim causing the fight or flight reaction in the host.

Spore Flies
In the hive players can also come across spore flies. These look like bat-winged grub insects with glowing abdomens. They bite and leach onto victims drain 1 hp per turn they are attached.

Mushmoons
These are strange yellowish mushrooms that glow in dark and give off a candles worth of light for up to 30 days even after being picked.  When eaten by humanoids it can create various effects depending upon the age of the mushroom.  Dried mushrooms can be eaten like an iron ration and fill like a full meal.  Young ones are deadly poisonous, and full grown ones can induce madness.

What lies lower in the lair?  Time will tell...

Download Pocket Full of Peril #7 PDF  in the PFoP Repository link to the right.


Also note my first dozen COLLAPSE RPG Administrator kits are now for sale!
Posted by Fenway5 at 10:34 AM

Thanks! It had been awhile since I posted one. Work gets in the way of all the fun!

This is very cool. Love the map, by the way. Those Spore Flies are icky, but would be fun to let loose around some PCs...