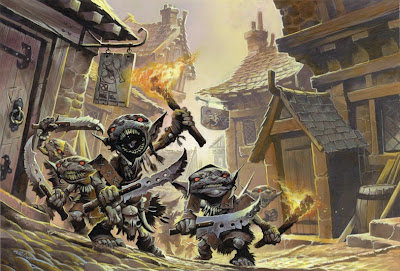 The "name that game" poll on this site and on the Roguish RPG site turned out about as mixed as I was on the title.  Even so, Roguish did get the most votes, so it stays as the game title.  For those who took time to respond thanks!

Here is another brief look into Roguish with creatures and stat blocks.  As with everything Roguish I try to skin it down to what's most important, at least as I see it.  You may see some things missing that you feel are important, and if so let me know what and why.  Is treasure important? Number appearing? Habitat? I did not think these critical and they could actually be limiting, but you still have chance to tell me I'm wrong and explain why.


Animals and Monsters
Fantasy worlds of legend and literature are filled with all sorts of dangerous creatures. Herein you will find all sorts of challenging foes for your characters to overcome. In Roguish, animals and monsters are represented by seven Categories:
Type (TY): This broadly defines the category of creature in Roguish.  Some spells or special abilities may only affect certain creature types.
Animals-this includes insects, dinosaurs, dogs, bears, oozes, slimes, and other similar creatures.
Enchanted-this broadly covers magical beasts like dragons, demons, and living statues.
Humanoid-creatures which have a human like appearance and traits from goblins to giants.
Undead-creatures which have returned from beyond deaths pale veil like Zombies, vampires, and ghosts.
Skill level (SL): This represents its ability to make physical and magical attacks whether with claws, swords, bows, fangs or spells.  The SL is added to all attacks or spells cast of any kind made by the creature.
Second the SL can serve as a guide for the Referee.  It can be used to help determine if the creature is strong enough or too strong for the characters to face.  As a guideline a monster’s SL is roughly equivalent to a player character’s level.
Defense Value (DV): This bonus represents how well protected or how much armor the creature wears.  Add the creatures DV to its die rolls to defend from physical attacks. If using targeted combat rules the number in parenthesis is the target number you need to exceed to hit the creature.
Movement (MV): This represents the number of spaces a creature can move on the ground in one 5 second turn.  Multiply the score by 5 to get the number of feet that represents. If you see a slash the number after the slash is the creature’s speed flying.
Damage (DM): The letter after shows how much damage a creature does when it makes a successful attack.  This will be L, M, V, X, or Z.  If you see a + and a number (#) after the letter, it means you should add that number to the total damage rolled.   An Asterisk means they creature has a special attack like fiery breath or magical spells!  See that creature’s description for more information.
Hit Point (HP): This is the amount of damage the creature can take before it dies.
Behavior (BE): This will give you an idea of how and why the creature acts. Below is a brief list of possible behaviors, feel free to add your own.
Cowardly-attacks with surprise or in groups, flees if things go badly
Territorial-fights if attacked or to defend territory or property it claims as its own
Aggressive: Will fight and pursue those who retreat
Creature Example
Goblin
TY: Humanoid SL:1 DV:1(11) MV:7 DM:L* HP:6 BE: Cowardly
These small 3 foot tall pale green or gray skinned creatures are thin wiry and not too smart. They breed like rabbits and are notorious thieves with a hideous love of humanoid flesh.  Dwarfs have tired for eons to destroy them, but like rats they simply scurry away.  Usually they are armed with knives, short bow, javelins, and small shields.  For every 30 goblins, one will be a shaman knowing how to cast 1-3 different spells.
Posted by Fenway5 at 6:12 AM