The Jacksonian Conundrum or Why Munchkin and not GURPS 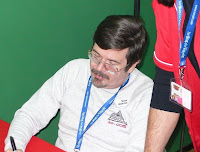 I was going to start out by listing my history with SJG but let's be honest, it won't matter.  If you hate what a write, convincing you because I grew up playing them that it matters, frankly won't.

So Evil Stevie was at the game show I was at today.  Yup saw the new Ogre, and a boatload of stuff that was part toy and part game.  Then there were the truck loads of Munchkin stuff.  For those not playing, in essence Munchkin consists of leveling up your character to 10th level to win.  You play good cards on your self, and everyone plays crap cards on you to stop you.  Now pick a theme, rinse and repeat.  Unlike the more erudite of the OSR, I do not despise munchkin and its ilk.  SJG has hit on a theme and game design that appeals broadly.  If they don;t have your theme, wait a few months its coming...including Axe Cop.  Yup That is not a mis-print, look it up.  Don;t be surprised if Munchkin Conan does not show up (or some riff on it) as well...

I am listening to Steve pitch his stuff and I come up with 3 things:
1) Steve is Smart
2) He listens and produces what his customers support
3) He isn't afraid to try things-PROVIDED they make him $

Look at the bulk of SJG's projects and they are a lot of one off's with potential.  Let's take Cthulhu dice.  He made the game sure...now he has a Cthulhu dice bag that looks like Cthulhu...and he is coming out with a giant foam die version with Cthulhu silly bands as markers.  Clearly this is making him $. If an when any of these bomb-Steve moves on.

He showed a giant plush tentacle, maybe 2 feet long-no purpose, no game tie, just a tentacle.  If enough attendees could convince him they could sell it-SJG gets in the foam tentacle business.  If it sells maybe you get foam eyes on stalks next, if that sells, maybe wings.  Steve stops when a sales threshold is not met and then moves on.

So why not GURPS?  Unlike the last edition which filled shelves with splat books, this edition really does not have anything to show for itself.  In fact I don;t remember seeing any GURPS at his rather large booth.  What does that tell me? It is not selling. In fact it is selling so poorly, it isn't worth talking about or showing to prospective retailers.  Brother that is bad...remember the foam tentacle? He was willing to talk about that...but not GURPS...yeeech

Okay so Munchkin sells by the goat-load, and GURPS is Texas sized roadkill.  What's my point?  Should be obvious-PEOPLE WANT AND WILL BUY EASY TO PLAY AND UNDERSTAND GAMES.  Munchkin-easy, GURPS-hard.  Solution?  Already made (but need updating) Melee and Wizard.

Don;t believe me? Okay let's talk about WotC!  Yup after they had zippo at GAMA, they had 40 feet of gaming goodness at this show!

That isn't a mistake either and D&D was spread out to cover the 5 feet and almost no one was looking at it.  WotC was showing what people were buying. (FYI-they have Shogun/Samurai swords reprint coming-looks sweet!)

To be clear I am not some gilded age wanna be, back to the future, everything was better when TSR had a cartoon, my kingdom for a wood grain box devotee.  What I am is mystified by the blind devotion to encyclopedic gaming production in an age of on demand consumer. Is that a problem?  If you think it is, you need to ask yourself what the problem is?  Is it the chicken laying the egg or the egg that is getting produced? Or do we need a different bird altogether now?

Well I always thought that the point of having a GM was that s/he was, to a large degree, the rulebook. Sure, some rules, for the most common things is nice, everyone likes to have an idea where they stand. But players shouldn't need to learn hundreds of pages of rules (and pay for them); not when they have an entire person who's job is to adjudicate situations.

Kids these days play free-form roleplaying games over social media & technology. No rules. They seem to have fun, although I'll bet a fair number of games turn into Calvinball. But they play!

The advantage of Munchkin- $25 and that's all you need to start playing. Lots of expansions and variations available. More traditional RPGs. How many cost $25 or less? Not too many. And for new players-a game that's a 200 page text book they have to learn?

That initial buy-in for GURPS; what is it? $100. and there's probably 3 or 4 other books that seem like they'd be necessary for the sort of game you want to run (whatever genre you want).

So at least Jackson is managing the company responsibly. If GURPS has become a beached whale, doomed to suffocate under its own weight, he seems to have realized the futility of trying to push it back in.

But he doesn't have the rights to Melee and Wizard. He'll have to bring back Man-to-Man; of course that lead to GURPS...

Your comment seems to say the WOTC is also being managed responsibly. I think that assertion will get you the most flack.

@GSV-First thanks for taking time to post a reasoned and detailed response! In both the case of SJG and WotC/Hasbro-yes I believe they are both correctly managing their current business model. My question is though, shouldn't they each be looking to change the model? If Encyclopedia Gamica's don't bring in the kids dollars isn't time to try a different model? I could be completely wrong and no small sized rpg or rules lite approach will do.

Strangely though, while Melee/ Wizard are off limits-a simple system like this could be possible, inexpensive enough to take a risk on, and quite probably popular. That's just this heretics opinion though...

Not being a lawyer or such, how long does it take Melee/Wizard to fall into public domain? Or will it ever?

From personal experience, I know that my son and I both prefer simpler rule-sets. Even in ancient times when I played AD&D we only used a fraction of all the material in the core books.

@ Narmer-Interestingly enough, Dark City Games has wisely put out its rules as a free download and has purchase and maintained "the fantasy trip" websites. As The owner does not in anyway assert his rights nor impede them, I think it could be a bit of a moot point.

Further a complete artistic re-design and re-post of Melee was done a few years ago to no backlash or command to remove. Does that mean it is legal? I am not a lawyer and give no council on such matters. It is interesting to note failing to enforce your trademarks and such certainly seems to be a sign of abandonment.

I agree simple rules allow you to fill in the gaps with the most freewheeling fun. That's probably not for everyone, but I can't see playing with rules lawyers!

I'm glad Dark City Games is keeping the flame alive. I've got "Wolves on the Rhine". It brought back so many memories. The redesign, is that Kwanchai's or is there another I don't know about. It is a great take on Melee.

I did Wolves! Thanks for the thumbs up. It needs work clearly, but it was fun to do. Kwanchai's is the redesign I referenced although you can find the full melee and wizard on the web.

We are in the electronic age . . .
pencil and paper is so 20th century,

we need to play nice and keep the flame alive,
so that we are relevant when
nuclear winter (summer 8 - )
sets in in the 22nd century . . .

I agree it is the electronic age, heck even the books I carry with me on trips now are trapped in my kindle! Yet, we still have a vibrant board game market despite iphones, ipads and computers. We still have an active card game market despite all of the same and despite online poker, online casinos, and Las Vegas! I guess my point is, people playing games face to face isn't going away. So why is it so hard for RPG's to have a place outside of online? I think it comes down to difficulty as the primary driver forcing people online, but of course I could be 100% wrong.

Nah, you are probably right . . .
rules are too complex,
kids arent into reading anymore and
imagination is stunted by CGI

send me an snail mail address at
clov isCi thogAT hot mailDO Tcom
so that I can order my administrator's kits !!

Email sent! Thanks for your interest in COLLAPSE!