Notes from the desert 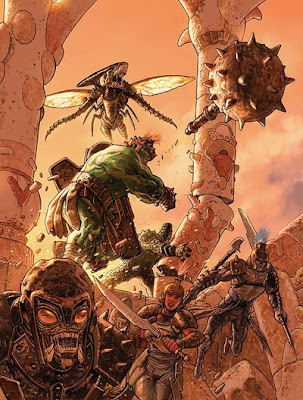 Okay John Carter fans (movie or otherwise) I'd like you to take the way back machine to 2006--and seek out PLANET HULK!  I have recently purchased the TPB's of the Planet Hulk series-the prequel (don't bother) The Planet Hulk book (buy it now!) and World War Hulk (meh)  I highly recommend Planet Hulk TPG as it also includes the gladiators guide to Planet Hulk...which I will be using as inspiration for a new Rogue Space setting.

I have picked up (but not yet read) the son of Hulk TPB's which I believe keep the action back on Sakarr.  Take Conan + John Carter and add in a healthy dose of Hulk Smash: PLANET HULK!

Rumor is they plan on making a planet Hulk film...so read the real deal before that frak it up!

I am in LV for the GAMA trade show...a small WotC info only booth, no Paizo booth , no Steve Jackson Games booth, No mongoose booth,...lots of distributors and card game and miniature game and board games and dice manufacturer booths though...
Posted by Fenway5 at 5:01 PM

when I was last at GAMA
there was much warplaying and RPG goodness to be found ...

I did not see a booth listing--are they part of another booth perhaps?

They did do a Planet Hulk animated movie. That book is one of my favourite comics of recent memory.

Hmm, that looks interesting. As someone who doesn't really follow comics, thanks for the note.

Really an animated movie? Any good?